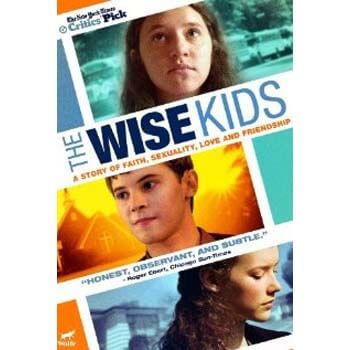 The Wise Kids is a 2011 American drama film written and directed by Stephen Cone and starring Molly Kunz, Tyler Ross, Allison Torem, Matt DeCaro, Sadieh Rifai, and Stephen Cone. An ensemble, coming-of-age piece, the film follows a group of young members of a South Carolina Baptist church as they confront issues of homosexuality and a crisis of faith.

Brea (Molly Kunz), Laura (Allison Torem), and Tim (Tyler Ross) are three high school seniors and close friends connected by their South Carolina Baptist church. As they prepare for life after graduation, Brea begins to have doubts about her beliefs, creating a rift between her and the devoutly religious Laura. Likewise, Tim begins to confront feelings of homosexuality, much to Laura's dismay. Brea's doubts about her faith continue to grow as she researches contradictions in the Bible. She befriends an outcast named Cheryl (Sadie Rogers), the granddaughter of a longtime congregation member, Ms. Powell. Cheryl confesses to Brea that she is a nonbeliever, further prompting Brea's curiosity and disbelief.

Meanwhile, Elizabeth (Sadieh Rifai), a fellow congregation member, is suffering from a lack of intimacy with her husband Austin (Stephen Cone), the church's music director. Austin begins to confront his own feelings of homosexuality, even privately exchanging an awkward kiss with Tim during a house party. Elizabeth continues to struggle with her husband's lack of intimacy and embarrasses herself at a party after flirting with the church's married prospective youth director Dylan (Cliff Chamberlain). Austin and Elizabeth later go out on their anniversary and get drunk. Afterward, despite his best effort, Austin is still unable to perform sexually for his wife.

Tim eventually comes out to his single father Jerry (Matt DeCaro), who is accepting—if initially apprehensive—of his son's sexuality. Tim's younger brother Brad (Jacob Leinbach) does not take the news as well, but Jerry advises Tim to give Brad some time to process it. Tim and Brea then take Cheryl out to a dance club, where Tim further explores his sexuality by passionately dancing with a stranger.

Laura starts feeling increasingly alienated from Tim and Brea, which is only further complicated when Tim and Brea are accepted into New York University. Feeling her once close relationship with Tim and Brea fading away, she tries to befriend April (Alyssa Puckett) over a tense lunch date where she is introduced to Patrick, April's cousin. Laura, Brea, and Tim hang out for a final time before they head off to college. Laura then makes a final, impassioned plea for Brea to remain true to her faith.

The film then picks up after the three friends return home from their first semester at college. Laura is now dating Patrick while Tim and Brea are even closer than before. Jerry reaches out to Tim, asking him if he has met anyone at school. In turn, Tim suggests that his dad start looking for someone to date, too. Later that evening, Austin comes to Tim and confesses that he might be gay. Tim says that he is too and Austin cries on his shoulder.

The film concludes as the congregation members gather at the church's living nativity. Austin mouths the words "I love you" to Elizabeth and she mouths back "I love you, too."