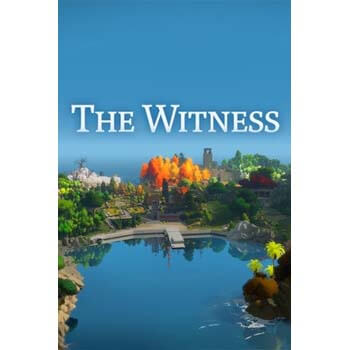 The Witness is a 2016 puzzle video game developed and published by Thekla, Inc. Inspired by Myst, the game involves the exploration of an open world island filled with natural and man-made structures. The player progresses by solving puzzles, which are based on interactions with grids presented on panels around the island or paths hidden within the environment. The game provides no direct instructions for how these puzzles are to be solved, requiring the player to identify the meaning of symbols in the puzzles. A central design element to the game was how these puzzles are presented so that the player can achieve a moment of inspiration through trial and error and gain that comprehension themselves.

Announced in 2009, The Witness had a lengthy development period. Jonathan Blow, the game's lead designer, started work on the title in 2008, shortly after releasing Braid. The financial success of Braid allowed him to hire a larger production team without ceding control over the final product. To create the game's visual language, the team developed their own game engine and retained artists, architects, and landscape architects to design the structures on the island. This required a protracted development process, and the game's release was delayed from 2013 to 2016. Blow desired to create a game around non-verbal communication, wanting players to learn from observation and to come to epiphanies in finding solutions and leading to a greater sense of involvement and accomplishment with each success. The game includes around 650 puzzles, though the player is not required to solve them all to finish the game.

The Witness was released for Microsoft Windows and PlayStation 4 in January 2016, with later versions released for the Xbox One, Nvidia Shield, macOS, and iOS. Original plans for release on the PlayStation 3 and Xbox 360 were abandoned as the game engine became more demanding, and the team ultimately opted for an initial release on Windows and the PlayStation 4, with support for other platforms following. The Witness received generally favorable reviews from critics, who praised the difficult but surmountable puzzles and the game's art and setting. Within a week of release, the game had sold over 100,000 copies, which was about as many copies as Braid had done within a year of its release, nearly recouping all of the development costs for the game.

The Witness is a first-person puzzle video game. The player, as an unnamed character, explores an island with numerous structures and natural formations. The island is roughly divided into eleven regions, arranged around a mountain that represents the ultimate goal for the player. The regions are differentiated from one another by changes in vegetation, and the puzzles within each region are similar to one another (e.g. their solutions may all involve symmetry). Throughout the island are yellow boxes housing turrets. These can be activated once the puzzles within the box's region have been solved. When activated, the turrets emerge to shine a light toward the top of the mountain, indicating that a section of the game is complete. Several such turrets need to be activated to unlock access to the inside of the mountain and ultimately reach the game's final goal. Additional puzzles can be discovered if all eleven turrets are activated.

There are additional optional puzzles scattered around the island. One such set of puzzles, accessible after entering the mountain and colloquially referred to as "The Challenge", is a time-based test to complete about a dozen algorithmically generated puzzles of various types within seven minutes. The sequence is set to music from Edvard Grieg's "Anitra's Dance" and "In the Hall of the Mountain King". The game has more than 650 puzzles, which Jonathan Blow estimates will take the average player about 80 hours to solve. The puzzles include one that Blow believed that less than 1% of the players would be able to solve.

Mechanically, all puzzles in The Witness are solved in the same way: a path is drawn on a grid. For a path to be a solution to a puzzle, it must satisfy a number of rules. The rules are usually simple. For example, in a grid with white and black squares, a path may be required to separate the different kinds of squares, as illustrated to the left. The rules are taught to the player throughout the course of the game by the puzzles themselves, as such, there is no text or dialogue directly explaining a puzzle's rules. While the rules a path must satisfy can differ substantially across the game, at least three rules apply to all puzzles: paths must always begin from a round node, end on a line segment with a rounded end, and avoid self-intersection. As such, many of the game's puzzles can be classified as mazes.

The game has two modes of interaction. The first, a walking mode, allows the player to move around and explore the island. The second, the path-drawing mode, is the one the player uses to attempt to solve puzzles. This mode is distinguished from the former by a white border around the screen. In path-drawing mode, the player's avatar is prevented from moving and instead allows the player to use their controls to trace the path through the puzzle's grid. The mode ends once the player solves the puzzle or cancels the mode. Normally, this mode is activated in front of a panel, moving the player's view directly to the panel to solve it, but it can also be activated at any other time. Nearly all puzzles provide immediate feedback if they have been solved correctly or not through sound effects or visual indication.

Most puzzles are easy to identify, located on recognizable eye-level panels scattered around the island. Sometimes several panels will be clustered together, as is typically done when the game is teaching a rule to the player. Most panels are daisy-chained to one another with power cables; solving one will light-up the cable, and unlock another panel. When this occurs in one of the game's regions, the complexity of the puzzles increases as the player works towards unlocking the region's yellow box (the size of the grids may increase, the region's rules may be refined, or new rules may be created). Though puzzles in a given region usually need to be completed in order, the regions themselves do not. This gives the game an open-world feel and allows players who get stuck in one region to move on to another.

Sometimes the rules of a puzzle depend not on the elements in its grid, but on the environment itself (for example, studying a tree whose branch structure mimics that of a nearby grid). There are also a number of optional environmental puzzles, where a single path is disguised in the environment. As with the game's grid puzzles, these are solved by entering path-drawing mode and tracing out the path. However, the components of such paths are distributed across different parts of the environment and disconnected. Only when a path is viewed from a certain perspective do the components join together to form a continuous path. The player then needs to find the correct viewpoint to complete the puzzle. Completing one such puzzle leads to one of the game's endings which shows a live-action sequence, apparently taken from the point-of-view of the player, as they finish the game and take off their virtual reality headset, having seemingly been lost in the game for several days, and trying to get back to their senses but still looking for the game's puzzles in the real-life environment.

Throughout the island are audio recordings that provide insightful quotes for the player, from people such as Buddha, B.F. Skinner, and William Kingdon Clifford. Voice actors for these logs include Ashley Johnson, Phil LaMarr, Matthew Waterson, and Terra Deva. The player can also encounter a theater where short video clips, such as from James Burke's Connections series or the ending of Andrei Tarkovsky's Nostalghia, can be viewed. A number of visual illusions based on depth perception from the player's position can be found in the game's environment, such as two seemingly disparate human figures at different parts of the island that appear to be holding hands when viewed from the right position and angle.