The Woman He Loved 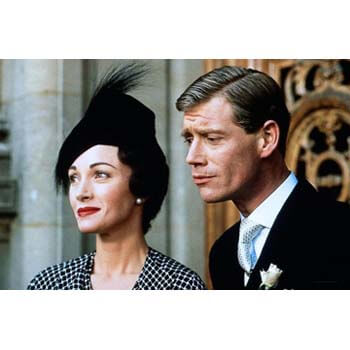 The Woman He Loved is a 1988 British HTV made-for-television romantic drama film for ITV about the abdication of Edward VIII. Directed by Charles Jarrott, it stars Anthony Andrews, Jane Seymour and Olivia de Havilland. Jane Seymour was nominated for a Golden Globe Award for Best Actress – Miniseries or Television Film at the 46th Golden Globe Awards and Julie Harris was nominated for a Primetime Emmy Award for Outstanding Supporting Actress in a Miniseries or a Movie. Costume designer Robin Fraser-Paye was also nominated for Primetime Emmy Award for Outstanding Costume Design for a Miniseries or a Special. It was partly shot at Shirenewton Hall in Monmouthshire. This was Olivia de Havilland's final acting role, before her death in 2020.