Unless the Water Is Safer than the Land 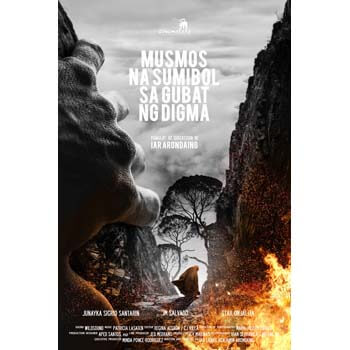 Unless the Water is Safer than the Land, whose Filipino language title, Musmos na Sumibol sa Gubat ng Digma actually literally means "A Child Who Sprung out of Forest of War", is a 2018 Philippine independent film directed by Iar Lionel Arondaing.

It was released on August 3, 2018, as part of the 14th (2018) Cinemalaya Independent Film Festival, where it won the award for Best Sound in the full-length feature film category.

In the film, an old man recounts the coming-of-age tale of a young Muslim girl named Eshal (Junyka Sigrid Santarin) who is forced to hide in the forest with her infant brother Affan to escape the violence of the inter-familial dispute (locally called "Rido") that has plagued her family. In the forest, he meets a boy named Farhan (JM Salvado) with whom she develops a friendship as they wait for adults to find them and bring them back to their families.

The English title of the film is taken from Somali-British poet Warsan Shire's poem "Home", which introduces the film.