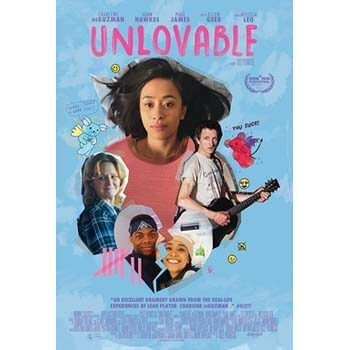 Unlovable is a 2018 American comedy-drama musical film directed by Suzi Yoonessi, and written by and starring Charlene deGuzman. The film tells the story of Joy, a Filipino-American woman, her struggle with sex and love addiction, and her recovery through music and platonic friendship. The film also stars John Hawkes and Melissa Leo, and is co-written by Sarah Adina Smith and Mark Duplass. The film was produced by Duplass Brothers Productions and distributed by Orion Classics. The film premiered at SXSW and received special jury recognition for the LUNA Gamechanger Award.

Joy is a sex and love addict. At the onset of the film, she tries to kill herself by taking pills and drinking NyQuil, but fails. She is in a questionable relationship with her boyfriend Ben who also works with her as an actor on a children's show, and who does not treat her well. Joy is constantly on the search for something to fill the emptiness in her soul, but nothing ever seems to be enough, whether it be drugs, alcohol, or sex. After Ben cancels plans with Joy, she gets drunk and has sex with another man. Finding pierogies in the refrigerator, the telltale sign that Joy went on a bender the night before, Ben breaks up with her and tells her to get help.

Joy goes to a sex and love addicts meeting where she meets Maddie, who she tries to get to be her sponsor. Initially, Maddie declines, but she does give Joy her phone number.

That night, Ben tells Joy to move out. In response, she goes out and then wakes up underneath a stranger in his house. The house is full of other men, asleep in various states of undress, who were apparently there for a Bachelor party. Joy finds a stack of photographs of herself from the night and is disgusted with what she sees. The first man offers Joy money for her services, assuming she is a prostitute. As she leaves, she gets a call from her boss, saying that she has been fired. Distressed, she calls Ben and then her parents, but no one answers.

She calls Maddie, who comes to pick her up and then agrees to sponsor her, so long as she goes 30 consecutive days sober from sex and romance. As Joy struggles to get sober, she follows Maddie's suggestion of adopting a hobby and finds herself taking over the drum kit in the garage that belongs to Maddie's awkward brother, Jim. As the two of them create music together, a secret friendship grows.