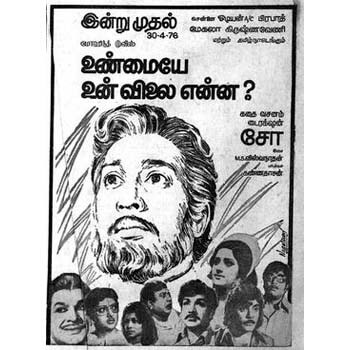 Unmaiye Un Vilai Enna? (transl. Truth, what is your price?) is a 1976 Indian Tamil-language satirical film written and directed by Cho Ramaswamy. It is based on his stage play of the same name. Cho also stars, alongside R. Muthuraman, Padmapriya and S. A. Ashokan. The film revolves around a priest's efforts to save a young man from conviction for murder. It was released on 30 April 1976.

A priest takes all possible steps to save a young man from conviction for a murder he committed to save a married woman from a womaniser. The priest stands up to his call as a minister of God and keeps to himself what the accused told him in private confession. He even hides that man from the police until he collects the necessary evidence to disclose the circumstances that led to the murder. He succeeds in his endeavour, risking his reputation, even his job and eventually his life.