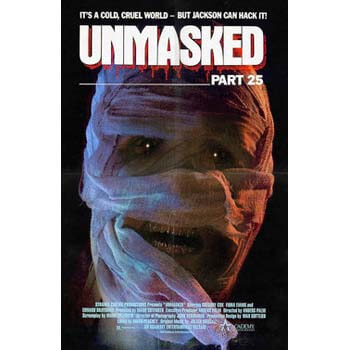 Unmasked Part 25 (also known as The Hand of Death and Hand of Death Part 25: Jackson's Back) is a 1988 British slasher film directed by Anders Palm. Written and produced by Mark Cutforth, the film serves as both as a horror film and a parody of the slasher genre, and the Friday the 13th film series in particular. It stars Gregory Cox as Jackson, a hockey mask-wearing serial killer who develops a romance with a blind woman named Shelly (played by Fiona Evans) and grows weary of his murderous ways. The film's cast also includes Edward Brayshaw as Jackson's father.

Unmasked Part 25 was shot on location in London, England and was released direct-to-video. In 2019, the film was restored and released on DVD and Blu-ray by Vinegar Syndrome.

In London, couple Pete and Ann are walking to a flat party when a stranger warns them not to enter the residence where the party is being held, claiming that an evil child was born there and that he has returned from a distant place in search of revenge. They ignore his warning and join their friends Patti, Mick, Monica and Shelly in the flat. Outside the party, Patti's date Albert is murdered by an assailant wearing a hockey goalie mask. Inside, Pete and Ann venture down into an unkempt room. The masked killer beats Pete to death with a shovel and fatally garrotes Ann. Mick and Monica go upstairs to have sex, and the killer impales them with a spear. The killer then murders Patti with a light fixture before dancing with her corpse while smoking a cigarette.

The killer walks downstairs, where he finds Shelly. She is blind, and believes that Patti set him up with her as her date. She brings him to her home, where he reveals that he can speak. The killer, whose name is Jackson and whose face is disfigured, says that he has never had anyone to talk to, and that people see him as a monster. Shelly and Jackson share a kiss and have sex. Jackson tells her that he was abused by his alcoholic father, and that Jackson and his mother moved to the United States when Jackson was young. Jackson was thought to have drowned at a camp one summer, but he had survived.

Jackson returns to the unkempt room in the house where he was born. His drunken father is there, and Jackson tells him about his feelings for Shelly, and that he does not want to kill any more people. His father, who was himself a murderer, berates and dismisses him. Later, Jackson and Shelly visit a Halloween mask store. Due to the goalie mask he wears, Shelly compares Jackson to a character in a film called The Hand of Death. Jackson, frustrated, replies, "don't you understand? I am that guy from the movies!" Shelly purchases a goalie mask of her own and the two go for a walk together.

On Friday the 13th, Jackson heads on foot to the house where Nick, Christi, Mac and Barry are staying. Mac strays into a nearby wooded area with a woman named Charlotte. Jackson confronts Charlotte, laments the dullness of his murder sprees, and advises her against running away since she will inevitably stumble and fall. As predicted, she falls while trying to flee, and he kills her with a pitchfork. Nick then wanders outside and is also killed by Jackson. Jackson enters the house, where he murders Barry with an axe and drives a cleaver into the face of Barry's partner Meagan. Jackson then pursues Christi, corners her in a shower and kills her. He later visits Shelly and attempts to break up with her, and she tells him that she is pregnant. Begging for her forgiveness, he slits her throat. He leaves and walks down the city streets, before falling to his knees in anguish when he sees a cinema marquee that reads The Hand of Death Part 26: Jackson Returns.