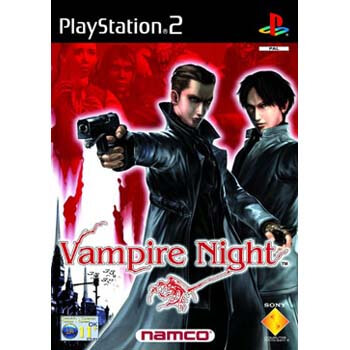 Vampire Night (ヴァンパイアナイト, Vanpaia Naito) is a light gun game produced by Sega's Wow Entertainment, distributed through Namco and released in 2000 for video game arcades. It was later ported to PlayStation 2 in November 2001.

A struggle between light and dark, from three centuries back, is about to ensue. The parties involved are Michel and Albert, the two vampire hunters representing light, and the vampires representing dark. The story takes place in an alternate version of the year 2006 in France, when progress looks stuck in the late 19th century.

Michel and Albert rescue a 12-year-old girl named Caroline who witnessed a couple of villagers held hostage by the vampire sarcoma. After rescuing the villagers and Caroline, the vampire hunters proceed into the castle to destroy the remaining forces of dark.

Although the forces of evil reveal that they created Michel and Albert to kill themselves, they became afraid of death and tried to stop them. It is important to note the Hunters are in fact Dhampyrs (half-vampires), foreshadowed by their glowing eyes. The outcome is a pyrrhic victory for the forces of good; as the forces of evil are stopped, the vampire hunters decide to let the rising sun end their own lives as well.

Six months later, Caroline pays her respects to the vampire hunters at their graves, glad that she is alive, by putting one of their guns in front of one of their graves, stating that "her heart shall remember all.... That day, that moment, and what happened", before her summer hat flies away to the camera to end the game.