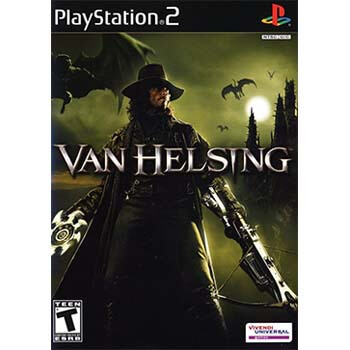 Van Helsing is a third-person shooter for the PlayStation 2, Xbox, Game Boy Advance and mobile phone, which is based on the 2004 action horror film of the same name by Stephen Sommers.

Van Helsing's gameplay bears similarity to the Devil May Cry series by Capcom. Van Helsing begins the game wielding two handguns and his Tojo blades. He later acquires various other weapons, some of which are seen in the movie, such as the shotgun and the bow gun. Van Helsing can make use of both his firearms and his blades to dispatch enemies. The player also has the ability to use enhanced ammunition with Helsing's weapons once the ammo is found. Hitting the L1/LT trigger gives Van Helsing a blue-ish glow as he unloads his enhanced ammo. Van Helsing also can perform evasive rolls in four directions to avoid incoming attacks. Van Helsing also has a grappling hook that allows him to latch onto high ledges that are otherwise inaccessible. Van Helsing can make use of this grappling hook to start combos or to perform grappling jumps.

The game also features a shop mechanic where players can purchase additional combat techniques and power-ups to increase health and other characteristics. Items in the shop can be purchased by using “orbs” that are collected from fallen enemies.

After a battle which results in the death of Mr. Hyde in Paris, Van Helsing is sent by the Vatican to hunt down Dracula in Transylvania.