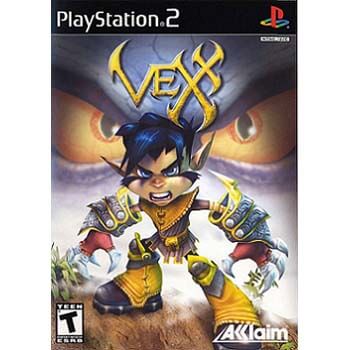 Vexx is a 2003 platforming video game developed by Acclaim Studios Austin and published by Acclaim Entertainment for the GameCube, PlayStation 2 and Xbox video game consoles. The game was released in North America on February 11, 2003, and in Europe on April 4, 2003. The objective consists of collecting magical hearts and unlocking more worlds to play, defeating enemies and jumping across platforms. Vexx is armed only with the legendary Astani war talons, which give him the power to defeat his enemies, as well as fly and swim underwater.

Vexx is primarily a 3D platformer with a design mentality akin to Super Mario 64. The player controls Vexx through a variety of non-linear open levels. The player is free to explore these levels and complete challenges in any order. Vexx can perform a number of jumps, can climb walls, swim, perform combo attacks and juggle enemies. He can also fire projectiles if the player charges his War Talons.

The introduction tells briefly of a planet called Astara that was inadvertently destroyed by its own inhabitants, who "opened a door better left closed". The planet was, in fact, destroyed by the Shadowraiths, who had poured through the Landspire and the Rift system that had been created by the ambitious Astani in order to access other worlds. The Wraiths, led by their leader Dark Yabu, attacked Astara, ultimately draining all of the energy out of the Rift system. However, an official supplementary comic reveals how Treyven, the Guardian of Astara, used the legendary Astani war talons to defeat the entire first wave of the Shadowraiths at the cost of his own life.

Seven hundred years later, Astara is literally in pieces, and all that is left are large chunks of land floating in an asteroid field. However, the individual pieces of the planet are still habitable. One village known as the Overwood, populated by a primitive race called the Valdar, is eventually discovered by Dark Yabu, who attacks the village with his Shadow Horde. The only Valdani who attempt to resist is Vargas, the village Guardian, and his grandson, Vexx. Despite their bravery, they are overcome by Yabu's forces and are shackled with the rest of the villagers, all of whom are then made to toil in mines searching for Wraithearts - the last remains of the first wave of Wraiths and the only remaining source of the Rift system's power.

Vexx is "beaten with word and whip" until "his rage became unbearable", and he finally lashes out at his oppressors. He is stopped by Yabu, who would have killed him if Vargas had not then attacked Yabu to save his grandson. Furious, Yabu turns on Vargas instead and murders him with his shadow powers. Later that night, determined more than ever to get revenge, Vexx sneaks out of the caves and onto Yabu's windship. There he discovers Treyven's skeleton wearing the legendary Astani war talons and clutching a spire of rock. Yabu had kept the talons hidden for years because he was unable to destroy them and feared them falling into enemy possession. The talons permanently attach themselves to Vexx's hands, at the same time causing an explosion that destroys the windship and nearly kills Vexx. While he is unconscious, Vexx learns through a vision that Vargas' soul is still imprisoned within Yabu's magical amulet; Yabu plans to feed on the soul's pain and misery until Vargas is no more. Vexx is then taught how to use the Astani war talons while still unconscious by the weapons themselves, which pass on all the knowledge and experience of the previous talonbearers.

When he wakes up, Vexx is in the Hall of Heroes, where previous wearers of the war talons have been entombed. An old man named Darby appears and informs him that it was he who carried Vexx to the Hall, thinking that the young boy was dead. He also tells Vexx that Yabu completely destroyed the village and that Vexx and Darby are the only ones left. Darby, however, is too old to fight, so he instructs Vexx to collect the hearts of dead Wraiths, which still contain the energy drained from the rift system, and use them to power the gates in order to find and stop Yabu before he opens the gate to his own world. Before Vexx departs, Darby warns him that the Wraiths are shapeshifters and to "trust no one along your journey".

Later on, Vexx meets up with Darby again inside the Landspire, and the two of them encounter Reia, the last remaining Astani warrior, who is also the narrator of the game. Reia exposes Darby, who turns out to be Dark Yabu in disguise. Both Reia and Vexx try to attack Yabu but he escapes, taking Reia's magical staff with him. It is revealed that by collecting the Wraith hearts, Vexx was actually helping Yabu power the gate to his own world. Since the only way to close the rift is with Reia's staff, Vexx has to activate the rest of the gates and catch up to Yabu to get it back.

Vexx finally finds Yabu in the Shadow Realm, and the two of them fight one last time. During the battle, Vexx manages to take Yabu's amulet, which gives him an extra dose of power. Vexx ultimately wins and retrieves the staff, but Yabu's death causes the platform on which he and the portal back to Astara stand to begin to crumble. Unable to get back through the portal, he throws the staff through, successfully closing the rift and thus saving Astara, but also trapping himself in the shadow realm. He is last seen roaming the desolate, wraith-infested lands.