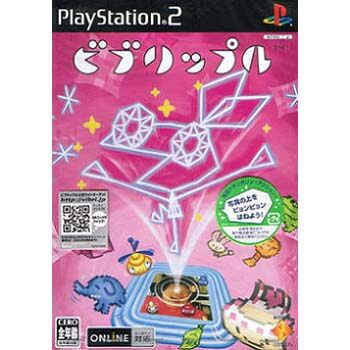 Vib-Ripple (ビブリップル, Biburippuru) is a video game for the PlayStation 2 created by Masaya Matsuura and his studio NanaOn-Sha. It is the sequel to the 1999 PlayStation game Vib-Ribbon. It was released in Japan in 2004.

Vib-Ripple is notable for allowing the player to import photographs to be used as the game's playing field.

The player takes control of Vibri, the simple, vector-shaped rabbit from the game's predecessor Vib-Ribbon. The game puts the player on top of various photographs, using each one as a trampoline. Jumping on a photograph loosens up 2D items called "Peta Characters," which Vibri must collect before a time limit expires. An icon on the left side of the screen gives the player a hint as to what part of the photograph to jump on to find the item; the icon's color, shape, and size corresponds to a certain combination of the three on the photograph. When Vibri is close enough to the item, a drumming sound is made and the controller vibrates. Vibri must also avoid creatures called "Boonchies" that inhabit the surface of the picture. Coming in contact with a Boonchie will cause Vibri to de-evolve from a rabbit, to a frog, to a worm, and eventually cause a game over. However, it is possible for Vibri to evolve into a form called "Super Vibri," allowing the player to temporarily disable a Boonchie, as well as see hidden Peta Characters.

Vib-Ripple has 60 default photographs. The player can create their own stages by uploading their own photographs from a digital camera or cellphone via the PlayStation 2's USB port, or even send pictures across the system's online network. The game automatically scales photographs down to 200 by 200 pixels.