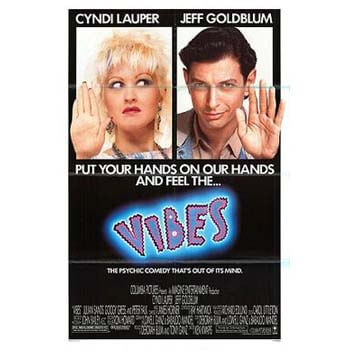 Vibes is a 1988 American romantic adventure comedy film directed by Ken Kwapis and starring Cyndi Lauper, Jeff Goldblum, Julian Sands and Peter Falk. The plot concerns Sylvia, a ditzy psychic, and Nick, her equally odd psychic friend and their trip into the Ecuadorian Andes to find the "source of psychic energy".

Lauper plays Sylvia Pickel (pronounced with an emphasis on the "kel", as she points out), a trance-medium who has contact with a wisecracking spirit guide named Louise. She first began communicating with Louise after falling from a ladder at the age of twelve and remaining comatose for two weeks. Subsequently, Louise taught her astral projection while Sylvia was placed in special homes for being "different." At a study of psychics, she meets fellow psychic Nick Deezy (Goldblum), a psychometrist who can determine the history of events surrounding an object by touching it. Sylvia has a history of bad luck with men, and her overly flirtatious behavior turns off Nick right away.

Sylvia comes home to her apartment one night to find Harry Buscafusco (Falk) lounging in her kitchen. He claims to want to hire her for $50,000 if she'll accompany him to Ecuador where his son has allegedly gone missing. Sylvia recruits Nick who is reluctant but also eager to leave his job as a museum curator where his special talents are abused like a circus act.

Once the two get there, they initially set out to where Harry's son was last seen, only to have Nick's powers tell them that Harry is up to something. Harry confesses that what he is actually looking for is a lost city of gold up in the mountains and that his last partner, who discovered it, went insane. Nick angrily retreats back to the hotel followed by Sylvia who feels embarrassed over being fooled by yet another man.

At the hotel Nick is attacked by a woman who tries to drug and then stab him, saying "You think you can just come here and take it away from us?" Convinced that there is something important, if dangerous, at work he agrees to trek back into the mountains to search for this lost city. The group makes a detour to visit Harry's former partner, who is in a vegetative state in the hospital. When Nick lays hands on him he receives a jolt of tremendous psychic energy; the former partner immediately dies.

Unexpectedly, the three are set upon by Ingo Swedlin (Googy Gress), another psychic from their test group. He holds them at gunpoint and threatens to kill them, but Sylvia uses Louise to get in touch with his long lost mother and the group escapes. They begin their journey anew only to once again be confronted by Ingo and by Doctor Harrison Steele (Sands). Ingo throws a knife into Harry's back and kills him, and the other two are taken hostage. They are forced to lead the way to this alleged city of gold.

Upon arriving, the group discovers an ancient pyramid shaped structure with mystical carvings. Sylvia translates them and they appear to reveal that the location was built by an ancient alien race who has embedded all of the psychic energy of the world into this pyramid. Using the translation Sylvia provided, Ingo attempts to decipher the secret to harnessing the energy, but before he can, Sylvia lays hands on the pyramid and allows the dangerous forces to flow through her. She kills their captors and is nearly killed herself, but survives. However, she permanently loses contact with her spirit guide Louise, who sacrifices her connection to Sylvia in order to save her and Nick in the process.

The two return to their hotel, battered and bruised but thankful that they played a part in releasing a dangerous force. Later that night they reconvene in Sylvia's room and bring to fruition a romantic flirtation that has permeated the film. Before they can make love, however, Sylvia hits her head on the headboard and reveals that a spirit guide has re-entered her life. It is not Louise, however, but the ghost of Harry.