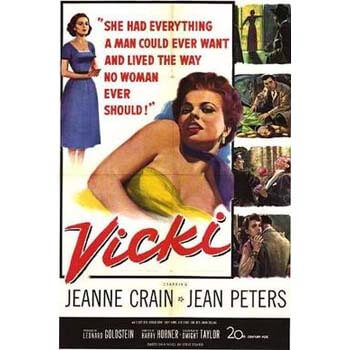 Vicki is a 1953 film noir directed by Harry Horner and starring Jeanne Crain, Jean Peters, Elliott Reid and Richard Boone. It was based on the novel I Wake Up Screaming, written by Steve Fisher.

Vicki Lynn (Jean Peters) is a waitress who is transformed into a fashion model by press agent Steve Christopher (Elliott Reid). When Vicki is murdered, detective Ed Cornell (Richard Boone) tries to blame the crime on Christopher.

In fact, the cop knows who the real killer is, but he is so hopelessly in love with the dead girl Vicki, who herself despised him, that he intends to railroad an innocent man to the electric chair. With the help of Vicki's sister Jill (Jeanne Crain), Christopher tracks down the real killer, Harry Williams (Aaron Spelling) and exposes the crooked cop Cornell, who had manipulated Williams into murdering Vicki.