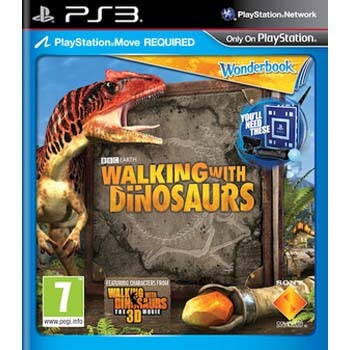 Wonderbook: Walking with Dinosaurs features multiple activities across five chapters, each of which is split into two sections, with each section involving a full "read" of the Wonderbook. Each chapter takes place at a different dig site, and begins with the player using the PlayStation Move controller to simulate different tools, with the goal of excavating the skeletal remains of a dinosaur, then using them to reconstruct the beast. From there, activities include battles between dinosaurs and mating rituals, where the Move controller is used to simulate movement and actions; using the Move controller as an X-ray torch to scan dinosaurs and explore their skeletons and organs, and balancing the weight of dinosaurs using different vehicles, among other activities.

The game also features questions to test the player's knowledge, with each section culminating in a five-question quiz. Each chapter also tells a different story, introducing different characters and dinosaur species. The first chapter features characters from the Walking with Dinosaurs feature film. Depending on their performance in the activities, the player will receive gold, silver, or bronze medals. Each activity also features a number of fact cards to find and collect. Players can then view their collection from a separate section of the game.