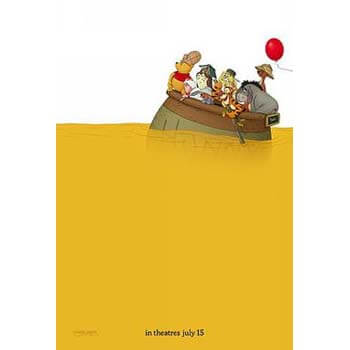 Jim Cummings reprises his voice roles as Winnie the Pooh and Tigger, and Travis Oates reprises his voice role as Piglet, while newcomers Tom Kenny, Craig Ferguson, Bud Luckey, and Kristen Anderson-Lopez provide the voices of Rabbit, Owl, Eeyore, and Kanga, respectively. In the film, the aforementioned residents of the Hundred Acre Wood embark on a quest to save Christopher Robin from an imaginary culprit while Pooh deals with a hunger for honey. The film was directed by Stephen Anderson and Don Hall (in his feature directorial debut), produced by Peter Del Vecho and Clark Spencer, and narrated by John Cleese.

Production began in September 2009 with Walt Disney Animation Studios' chief creative officer John Lasseter announcing that Disney wanted to create a film that would "transcend generations." The film features six songs by Kristen Anderson-Lopez and Robert Lopez, as well as a rendition of the Sherman Brothers' "Winnie the Pooh" theme song by actress/musician Zooey Deschanel. The film was released on April 6, 2011 in Europe and on July 15, 2011 in the United States. It received largely positive reviews from critics, but was commercially unsuccessful, having grossed $50.1 million worldwide on a $30 million budget.

The film is dedicated to background artist Dan Read, who had worked on several Disney animated films and died on May 25, 2010.

Winnie the Pooh wakes up one day to find that he is out of honey ("The Tummy Song"). While out searching for more, Pooh discovers that Eeyore has lost his tail. Pooh, Piglet, Rabbit, Owl, Kanga and Roo come to the rescue ("A Very Important Thing To Do") while Tigger has his bouncing fun. Christopher Robin decides to hold a contest to see who can find a replacement for Eeyore's tail. The prize for the winner is a fresh pot of honey ("The Winner Song"). After several failed attempts for what would replace Eeyore's tail, Kanga suggests that they use a scarf, which unravels.

The next day, Pooh goes to visit Christopher Robin and finds a note that says "Gon Out Bizy Back Soon" (a misspelling of "Gone Out Busy Back Soon"). Pooh is unable to read the note, so he asks for Owl's help. Owl's poor reading comprehension skills lead Pooh and his friends to believe that Christopher Robin has been abducted by a ruthless and mischievous monster they call the "Backson" ("The Backson Song"). Rabbit plans to trap the Backson in a pit, which they think he will fall into after following a trail of items leading to it. Meanwhile, Tigger, who wants a sidekick to help him defeat the Backson, recruits a reluctant Eeyore to be a second Tigger ("It's Gonna Be Great"). He dresses up like the Backson and tries to teach Eeyore how to fight. Eeyore manages to escape from Tigger and hides underwater where he discovers an anchor.

After a failed attempt to get honey from a bee hive, Pooh's imagination combined with his hunger get the better of him ("Everything is Honey"), and he ends up accidentally eating some mud and falling into the pit meant for the Backson. Rabbit, Kanga, Roo, Owl, Piglet and Eeyore (using the anchor he found as a replacement tail) try to get him out, but fall in themselves. Piglet, who did not fall in, attempts to get Pooh and friends out of the trap (though continuously irritating Rabbit with over-interpretations of his instructions), but runs into Tigger, who is still in his Backson outfit, and mistakes him for the actual monster. Piglet escapes from Tigger on a red balloon, which knocks some of the storybook's letters into the pit.

After the chase, Tigger and Piglet fall into the trap as well where Eeyore reminds Tigger that he, being "the only one," is "the most wonderful thing about Tiggers." Eventually, Pooh figures out how to use the fallen letters to form a ladder and his friends are able to escape the pit. They soon find Christopher Robin, and tell him about the Backson, but he clarifies by saying that he meant to be "back soon." The honey pot prize is given to the red balloon from earlier, much to Pooh's dismay.

Later, Pooh visits Owl only to find that Owl is the one that has taken Eeyore's tail, not realizing that it belongs to Eeyore. Owl has been using Eeyore's tail as a bell-pull for his door. Pooh decides to return the tail. Owl want to know what to do with Pooh's honey. Ignoring his tummy's requests, Pooh thanks Owl's offer, but he has to help his friend. That evening, Eeyore's tail has been fitted. Christopher Robin is proud of Pooh. As a reward for his kindness, he is given a large pot of honey. ("Pooh's Finale")

In a post-credits scene, the Backson is revealed to really exist, but is actually very nice and gentle. He finds the items left for him, including the chalk drawing of himself to which he calls it a "scary looking fella." Assuming the items belong to "him," he starts picking them up but ends up falling into the pit.