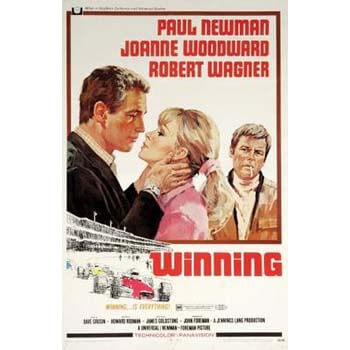 Winning is a 1969 American Panavision action drama sports film directed by James Goldstone and starring Paul Newman, Joanne Woodward and Robert Wagner. The film is about a racecar driver who aspires to win the Indianapolis 500. A number of racecar drivers and people associated with racing appear in the film, including Bobby Unser, Tony Hulman, Bobby Grim, Dan Gurney, Roger McCluskey, and Bruce Walkup.

Professional racecar driver Frank Capua (Paul Newman) meets divorcee Elora (Newman's real-life wife Joanne Woodward). After a whirlwind romance they are married. Charley (Richard Thomas), Elora's teenage son by her first husband, becomes very close to Frank, and helps him prepare his cars for his races. But Frank is so dedicated to his career that he neglects his wife, who has an affair with Frank's main rival on the race track, Luther Erding (Robert Wagner). Frank finds them in bed together and storms out. The couple separate, but Frank still sees Charley regularly. Frank's bitterness fuels his dedication to his work, and he becomes a much more aggressive driver. At the Indianapolis 500, Elora and Charley watch while Frank drives the race of his life and wins. After winning, Frank attends a victory party. He is uninterested when attractive women throw themselves at him, and he slips away. Luther finds Frank and apologizes to him for the affair, but Frank punches him. Frank visits Elora and tells her he wants to start again. Elora is unsure. The film ends with a freeze-frame as the two look uncertainly at each other.