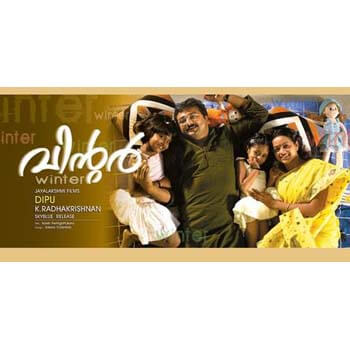 Winter is a 2009 Indian Malayalam-language horror film starring Jayaram, Bhavana Menon released in the year 2009. The film was shot in 2003. It was directed by Deepu Karunakaran and produced by K. Radhakrishnan. The music is scored by M. R. Rajakrishnan. Later the film was Dubbed into Tamil as Bhayam Bhayam released in 2012.

Film starts showing numerous children kidnapped and get cut at the neck by a psychopath. By the time children gets admitted, they will be dead due to severe cut at the neck and bleeding. One child whom police after intense chase is saved by Dr Ramdas, a surgeon. The police under Saju Paul searches intensely for the psychopath but ends up in a jeep chase. The psychopath gets killed during the chase by his car hit onto rock which causes the car explosion and police could only find the burnt dead body. Now Dr Ramdas and wife Shyama lives in a flat. Their daughters are naughty but are disturbed . So Dr Vinod is consulted. Dr Vinod advice to get a good home instead of flat for his children to run and play around the house like in his traditional family house. Dr Ramdas and wife search numerous houses but could not find a good one. Fed up with the search Shyama tells don't call her anymore. Finally Dr Ramdas finds the Hillview house advertisement in newspaper and go and see the house. Dr Ramdas likes the house. Finally Dr Ramdas and his family start staying. That night the bathroom toilet flushes automatically. Ramdas tell calls plumber to repair it the next day. Ramdas goes to work. Shyama starts to experience mysterious presence in the house. The bathroom shower gets on automatically. The big photo frame, in pujaa area, falls down from the wall without any stimulus. Somebody rings the calling bell but Shyama opens and find nobody. Gopalan comes during one such ring. Gopalan is a cook who is asked to help them by Ramdas. Gopalan goes to market to buy things and while come tries to steal biscuit packet from a shop. The shop keeper and people catch him in the middle of the bare area nearby the Hillview home. One Malayali fellow pass that way whom Gopalan tells he could not find any malayalis and if going nearby hill view home, both of them together go. But the Malayali fellow tells all are afraid to go that area as some supernatural presence is there even in morning time. And then leaves that area leaving Gopalan alone. Gopalan fear stuck, tries to walk but feels somebody chasing, and started running to hill view from the bare area. Gopalan see window curtain burning and runs up the staircase calling Shyama who come to know only when Gopalan screams fire. The fire is shut down. Shyama tells Ramdas to shift to another house. Ramdas resist and then consults Dr Vinod. Dr Vinod tells consult the Vasthu jyothisan. Vasthu jyothisan after identifying lack of interest from Ramdas, gets ready to perform Vasthu only after Ramdas tells to proceed with the Vasthu. Vasthu is done. Ramdas and Shyama gets more braveness and happiness and goes for a trip with children. Then the night Ramdas plan to go for movie. Dr Ramdas now sees a blood covered man figure upon closing the window. But Ramdas goes with his family for the movie. During this time Gopalan have a good bath and tries to have food after calling to radio station for a song with dedication to his close people. Upon looking to next room, Gopalan see something and gets afraid and jumps out of the house through the window. Ramdas and family come back. Gopalan tells he is leaving that night itself and goes away. Now Ramdas is called to attend a patient who is murmuring and breathing fast. The patient is given some medication. Next day a child is brought with a deep cut in the neck to Ramdas house. The child dies as Ramdas gets no time to repair the cut in the neck. Saju Paul warns Ramdas to be careful as some psychopath seems to be active like a psychopath before because again numerous children are getting kidnapped and cut in the neck like previously. Shyama gets a call from Stalin who stay next to their house. Shyama enters the house and see Stalin dead with a knife penetrating stuck onto his head. Saju Paul comes to protect them because that night again people has gathered to catch the psychopath. Dr Vinod has previously told Saju that another psychopath more cruel must have risen as due to psycho behavior, he wants to take the role of the previously killed psychopath. The psychopath attacks and defeat Saju Paul. This time Shyama runs with children but Shyama falls down, get hurt and unable to move. One child goes up the road. This time Ramdas arrives in his car as he tried previously to call but nobody picking the phone. Ramdas goes in search of others down the forest. Ramdas finds Shyama. This time second child is caught and about to be killed by psychopath. Ramdas fights with the powerful psychopath who defeats Ramdas easily. Again the psychopath try to kill the second child. Ramdas takes a big stone and hits down the psychopath. Film ends with Saju call Ramdas telling he got promotion as commissioner. Ramdas tells he don't want to leave the house as he feel in earth if heaven is there, that will be his house.