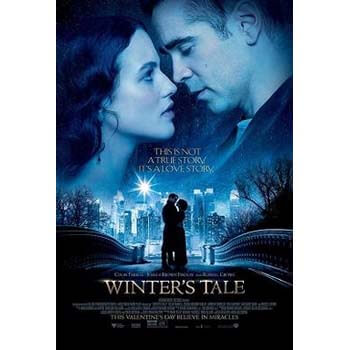 Winter's Tale (released in the United Kingdom and Ireland as A New York Winter's Tale) is a 2014 American romantic fantasy film based on the 1983 novel Winter's Tale by Mark Helprin. The film is written, produced and directed by Akiva Goldsman (in his directorial debut). It stars Colin Farrell, Jessica Brown Findlay, Jennifer Connelly, William Hurt, Eva Marie Saint, Russell Crowe and Will Smith. Winter's Tale premiered at London on February 13 and was theatrically released on February 14 in the United States by Warner Bros. Pictures. The film has a 13% approval rating on Rotten Tomatoes and grossed $30.8 million on a $75 million budget. It also received a Golden Trailer nomination for Best Romance Poster. Winter's Tale was released on DVD and Blu-ray on June 24, 2014 by Warner Home Video.

In 1895, a young immigrant couple is refused entry into Manhattan because they have consumption (Tuberculosis). When their infant son is not allowed entry to the country without them, the couple place him in a model sailboat named "City of Justice," in which the baby floats to the New York City shoreline. In 1916, the baby boy has grown up to become Peter Lake (Colin Farrell), a thief raised by a supernatural demon posing as the gangster Pearly Soames (Russell Crowe). Peter is marked for death when he decides to leave Pearly's gang. In a confrontation, he is rescued by a mysterious (winged at times) white horse, his guardian angel.

Although Peter hopes to move to Florida and come back in the summer, the horse encourages him to steal from one last mansion. The mansion is the home where Beverly Penn (Jessica Brown Findlay) lives, a young woman dying of consumption, whose fever is so high she sleeps outside in a tent in the winter cold. While her publisher father Isaac (William Hurt) and younger sister Willa are not home, Beverly discovers Peter preparing to rob the house. When Peter assures her that he no longer wishes to commit robbery, Beverly offers to make him a cup of tea. They tell each other their stories and fall in love. Pearly orders his men to Beverly's home, believing that saving her is Peter's "miracle" and spiritual destiny and that he can destroy Peter by preventing it. Peter rescues Beverly from being knifed by Pearly, and they escape to the Lake of the Coheeries, where Pearly, who is supernaturally limited to the five boroughs of New York City, cannot follow. Peter meets Beverly's family at their summer home and wins their respect.

While on a walk, Beverly explains to Peter that everyone is born with a miracle inside and they are ultimately destined to become stars when they die. Pearly asks Lucifer (Will Smith), for access to the lake home, but his request is denied. Instead, Pearly, who refers to himself as a Knight among Lucifer's angels, calls in a debt owed to him by another of Lucifer's angels. At a ball, the angel disguised as a waiter poisons Beverly's drink. When Peter and Beverly return home from the ball, Peter watches the shadows she casts upon the sides of her lighted tent, joins her, and the two make love. Her pulse races faster than ever due to the poison in her heart, and she dies. After the funeral, when Peter and his mysterious white horse return to the city, Pearly and his men surround them on the Brooklyn Bridge. To save its life, Peter orders his mysterious winged horse to fly away, and Pearly gives Peter five vicious head-butts, pushing him off the bridge.

Peter miraculously survives but wanders around the city with amnesia for a century, drawing chalk art of a red-headed girl on the pavements. In 2014, the 119 year-old, but physically undiminished Peter, bumps into a young girl named Abby and meets her mother, Virginia Gamely (Jennifer Connelly). He rediscovers the brass name plate of the "City of Justice", the toy sailboat in which his parents placed him. Peter then discovers the Theatre of the Coheeries, founded by Isaac, who has dedicated it to Beverly. He visits the Isaac Penn Reading Room where Virginia works, and she helps him restore his memory using historical photographs archived at the library. While there, he meets Beverly's now elderly sister Willa (Eva Marie Saint), who is the owner of Virginia's newspaper.

When Peter visits the Gamelys for dinner, he learns that Abby has cancer. Realizing that Abby, who is wearing a red scarf (like his sketches) and has red hair, is his "miracle" and spiritual destiny, instead of Beverly as he originally believed, Peter convinces Virginia that he can save Abby. Pearly learns that Peter is still alive and with Virginia, and he is surprised to learn from Lucifer that Peter was Beverly's miracle, making him love her so much that he couldn't die. Enraged, Pearly asks to fight Peter as a mortal so he can destroy him for good, and Lucifer grants his request. Pearly and his men arrive at Virginia's apartment, causing Peter and Virginia to flee to the rooftop with Abby. The mysterious winged horse flies them to the Lake of the Coheeries, but Pearly, now mortal, can pursue Peter beyond the Five Boroughs. After Horse dispatches Pearly's men by crashing the ice so that they all drown, Peter and Pearly engage in a fistfight. Peter is losing until a light shines from the heavens and allows Peter to stab Pearly in the neck with the name plate from the boat, "City of Justice." Pearly turns to snow and Peter is able to save Abby on the princess bed after he kisses her forehead. After visiting Beverly's grave one last time, Peter mounts the horse to be carried away to the stars, while the elderly Willa witnesses his ascension.