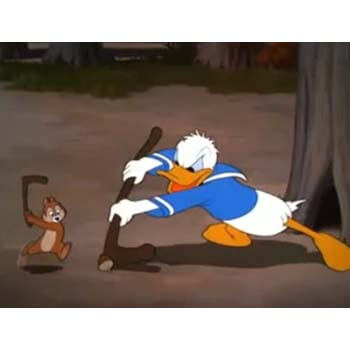 Winter Storage is a 1949 American animated short film produced by Walt Disney Productions and released by RKO Radio Pictures. Part of the Donald Duck series, the film stars Chip 'n' Dale who steal Donald's acorns while he is planting oak trees. It was directed by Jack Hannah and features the voices of Clarence Nash as Donald, and Jimmy MacDonald and Dessie Flynn as Chip and Dale.

Chip and Dale are not able to find enough acorns to store up for the winter. The chipmunks then see Donald Duck, working as a park ranger, beginning to seed a clearing in the oak forest. Seeing his large sack of acorns, they set out to steal it. They manage to make off with the entire sack, but Donald easily takes it from them just as they enter the ground entrance to their tree. He then places a box trap (baited with an acorn) which successfully ensnares both chipmunks despite Chip being fully aware of the ruse. While the chipmunks argue with each other, Donald looks on amused and provokes them to fight.

Finally the chipmunks see Donald and run for the acorns. Donald stands in front of the tree entrance to keep the acorns from going inside. Chip and Dale then pick up hockey sticks. Using teamwork and natural hockey skills, the chipmunks beat Donald at his favorite sport, and finally flatten him with an overwhelming acorn "stampede". A dazed Donald hits in one last acorn and laughs at the chipmunks as if he has beaten them. Dale concludes that Donald has lost his mind.