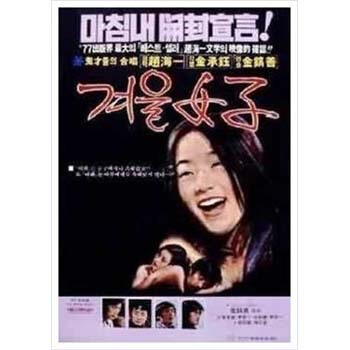 Winter Woman (Korean: 겨울여자; RR: Gyeo-ul-yeoja) is a 1977 South Korean film. It is based on a novel by Cho Hae-il which was serialised in the Chosun Ilbo in 1975. The popularity of the novel led to the film being made. Dealing with the sexual awakening of the female protagonist, the book and film earned the condemnation of conservative critics, however the author's leftist subtext went unchallenged overshadowed by the sexual themes. The film was the best selling Korean film of the 1970s, and made a star of its female lead Chang Mi-hee.

Yi-hwa is the daughter of a prosperous Christian preacher and has been raised to be morally and sexually conservative. Whilst still in High School her beauty earns her the admiration of many including Yo-sub with whom she becomes friends, however when Yo-sub desires sex with her she rejects him and he commits suicide. Becoming a university student she becomes the girlfriend of Suk-gi and he too desires to have sex with her. When Yi-hwa remains true to herself and rejects his advances he rapes her. Suk-gi dies in a car accident and she receives a posthumous letter from him accusing her of being selfish for withholding from him that which she could give without cost to herself, and valuing her chastity more than those she claims to love.

Shocked by her first sexual experience and the deaths of the two men she rejected, she becomes a sex volunteer, offering her body to men to use for sex; however she refuses both emotional attachment and money. Graduating from university she becomes a journalist covering stories about Seoul's female factory workers and she meets an idealist young teacher working with the children of the urban poor. Just as she is giving her body to those in need of sex, he is giving his mind to those in need of inspiration, they are both giving "water to the thirsty". She offers herself to him for his use. Even though they are now together, the novel concludes with the implication that she will continue to volunteer herself to those who have need of her.