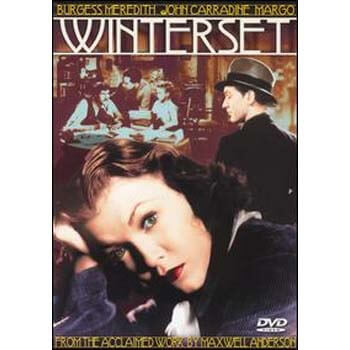 Winterset is a 1936 American crime film directed by Alfred Santell, based on the 1935 play of the same name by Maxwell Anderson, in a loose dramatization of the Sacco and Vanzetti trial and execution in 1928. The script retains elements of the blank verse poetic meter on which Anderson based his 1935 Winterset Broadway theater production.

Actor Burgess Meredith, later famous as “The Penguin” on TV’s Batman, made his film debut as the avenging son Rio Romagna.

The film greatly changes the ending of the play, in which the lovers Mio and Miriamne are shot to death by gangsters. In the film, the two are cornered, but Mio deliberately causes a commotion by loudly playing a nearby abandoned hurdy-gurdy and deliberately causing himself and Miriamne to be arrested, thus placing them out of reach from the gangsters. The film made a loss of $2,000.