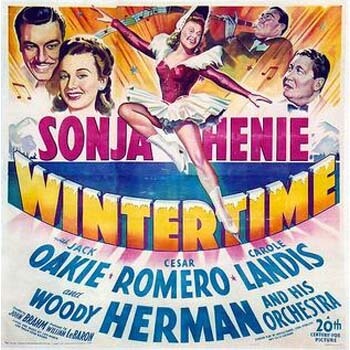 Wintertime is a 1943 Twentieth Century-Fox musical film directed by John Brahm and starring Sonja Henie and Cesar Romero. It also features Woody Herman and His Orchestra.

Norwegian millionaire Ostgaard (S.Z. Sakall) and his niece Nora (Sonja Henie) believe they will be staying at a posh resort in Canada, but it turns out owner Skip Hutton (Jack Oakie) and partner Freddy Austin (Cornel Wilde) are in debt and barely holding off foreclosure.

Nora schemes to get her uncle to invest in hotel improvements. She also falls for Freddy, although he's busy spending time with magazine photographer Marion Daly (Helene Reynolds), trying to gain publicity for the resort.

When more money is needed, Nora is offered a chance to skate in New York in a revue. But due to a legal technicality, she cannot enter the United States unless she is married to an American citizen, so handsome Brad Barton (Cesar Romero) gladly volunteers.