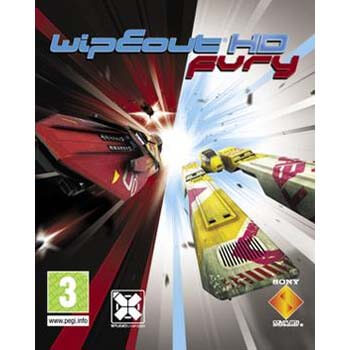 Wipeout HD is a futuristic racing video game developed by Studio Liverpool and published by Sony Computer Entertainment for the PlayStation 3. It is the eighth installment of the Wipeout series and was first released on the PlayStation Network on 25 September 2008 in both Europe and North America, and on 29 October in Japan. A major expansion pack titled Wipeout HD Fury was released worldwide via the PlayStation Network worldwide on 23 July 2009. A retail version was later made available in Europe on 16 October.

The game revolves around players competing in the FX350 anti-gravity racing league, and features selected tracks from the PlayStation Portable games Wipeout Pure and Wipeout Pulse, although the content has been upgraded to render 1080p visuals in 60 frames per second. Wipeout HD was developed by Studio Liverpool, who had desired to release a game for the PlayStation store to stress that downloadable content was not reserved for smaller games. The game was delayed for a few months due to reports of it failing epilepsy tests.

Wipeout HD and its expansion pack received positive reviews upon release. Critics unanimously praised the game's 1080p visuals, smooth frame rate, and techno soundtrack – a feature many critics recognised as a hallmark of the Wipeout series. The game received controversy over its in-game advertising at the time of the Fury expansion pack's release, with many players complaining of extended loading times due to in-game advertisements. Wipeout HD, along with its Fury expansion pack, was also chosen as a free offering as part of Sony's "Welcome Back" programme due to the 2011 PlayStation Network outage.

Wipeout HD is a racing game in which players compete in the FX350 anti-gravity racing league. The game features a selection of eight tracks originally used in Wipeout Pure and Wipeout Pulse, albeit updated in 1080p visuals and rendered in 60 frames per second. Players pilot anti-gravity ships owned by racing corporations (collectively referred to as "teams" in-game). The base game (excluding the Fury expansion pack) allows participation by up to twelve teams, with six ships each, trophy support, an online mode capable of holding eight players per race, and eight race tracks.

The game has five race modes: the first is a standard single race, which involves the player racing to finish first to earn a gold medal; securing second or third place will reward the player with silver and bronze medals, respectively. Tournament mode consists of four single races in each tournament; the player who earns the most points wins. Time trials and speed laps involve obtaining the fastest time in either three laps or a single lap. The final race mode is called "Zone Mode", in which survival is the goal, as the player's ship increasingly accelerates to extreme speeds. In addition to the five race modes, Wipeout HD provides a "Photo Mode", which can be activated after the player completes a race. In "Photo Mode", the player can take screenshots of the completed race and may change the exposure, saturation, lens focus, or add effects such as depth of field or motion blur.

Every ship in the game has its own characteristics; depending on the team selected, a ship will vary in terms of speed, acceleration, manoeuvrability, and shield strength. Each ship is equipped with an energy shield which absorbs damage sustained; energy is lost whenever the player's ship collides or is hit by weapon fire. If the shield runs out, the ship and player in question will explode, resulting in elimination from the race. However, players may replenish energy by absorbing unwanted weapon pick-ups. The weapons are the same ones featured in Wipeout Pulse; defensive weapons range from shields—which temporarily make the player's ship invulnerable to damage—to land mines and stationary bombs. Offensive weapons include machine guns, missiles, rockets, and a "quake" – which comes in the form of a devastating earthquake that damages all opponents situated in front of the player. In addition, every ship is equipped with air brakes which can be used for manoeuvring through corners at high speed.

An introduction to the series is the Pilot Assist feature. Intended for players new to the series, it is a passive auto-piloting feature that assists players by nudging them away from the edges of the track or from walls, though its effects at higher speed settings are less desirable. Wipeout HD allows players to control their craft by using the motion-sensitive features of the PlayStation 3's Sixaxis controller. Motion control comes in two variants: pitch and steering, or pitch only. The former allows the craft to be totally controlled by moving the controller, while the latter only allows the nose of the craft to be raised or lowered by motion control, with the steering either controlled by an analogue stick or D-pad.

A major expansion pack titled Wipeout HD Fury was released on the PlayStation Store worldwide on 23 July 2009. The pack consisted of four new race tracks, four "Zone Event" tracks, 13 new ship models, and three new game modes: Eliminator, "Zone Battle" and Detonator. The add-on also included a new 80-event campaign mode, a redesigned menu interface, several new trophies and six new music tracks. Eliminator mode is taken directly from Wipeout Pulse and centres around players destroying other competitors for points and finishing laps. "Zone Battle" is an eight-player version of the normal "Zone Mode". In it, players must fly over zone pads in order to gain enough speed and reach the target. The first player to reach the target wins, therefore ending the game. The final mode is Detonator, in which a single player scores points by shooting mines scattered throughout a race track.