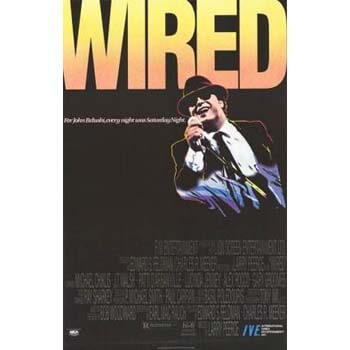 Wired is a 1989 biographical film of comedian and actor John Belushi, directed by Larry Peerce. It was based on the 1984 book of the same name by Washington Post journalist Bob Woodward, and adapted for the screen by Buckaroo Banzai creator Earl Mac Rauch. It stars Michael Chiklis in his film debut as Belushi. Wired was both a critical and a commercial failure. The film has yet to be released on DVD or Blu-ray, and the videocassette originally released by International Video Entertainment is out of print.

The story follows John Belushi (Michael Chiklis), shortly after his death from a drug overdose in March 1982, as he awakens in a morgue and is about to undergo an autopsy. Panicked, Belushi escapes and finds himself in the company of the enigmatic Angel Velasquez (Ray Sharkey), a Puerto Rican cabbie who takes Belushi to significant moments in his life from the beginning of his career to the courtship of his wife, Judith (Lucinda Jenney), into his burgeoning comedy career, his friendship with Dan Aykroyd (Gary Groomes) and his eventual decline. The film alternates between Belushi as a ghost and his journey with Velasquez to flashbacks (in non-linear style) as his career gains momentum. Meanwhile, journalist Bob Woodward (J. T. Walsh) is researching Belushi's life as he prepares to write a book about the late comic actor. Woodward's investigation leads him to Cathy Smith (Patti D'Arbanville), who procured drugs for Belushi, and the story climaxes with Woodward directly conversing with Belushi during the actor's dying moments.