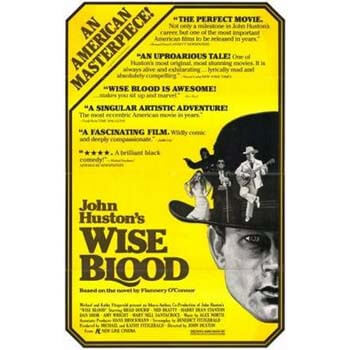 Wise Blood is a 1979 drama film directed by John Huston and starring Brad Dourif, Dan Shor, Amy Wright, Harry Dean Stanton, and Ned Beatty. It is based on the 1952 novel Wise Blood by Flannery O'Connor. As a co-production with Germany the film was titled Der Ketzer or Die Weisheit des Blutes when released in Germany, and Le Malin when released in France.

Hazel "Haze" Motes is a 22-year-old veteran of an unspecified war and a preacher of the Church of Truth Without Christ, a religious organization of his own creation, which is against any belief in God, an afterlife, sin, or evil. The protagonist comes across various characters such as teenager Sabbath Lilly Hawks, her grandfather Asa Hawks who is a conventional side-walk preacher; and a local boy, Enoch Emery, who finds a "new" Jesus at the local museum in the form of the tiny corpse of a shrunken South American Indian. Hoover Shoates is a promoter who wants to manage Hazel's career as a prophet while Hazel's landlady falls in love with him.

The director of the film appears in several fantasy sequences as Hazel's grandfather.