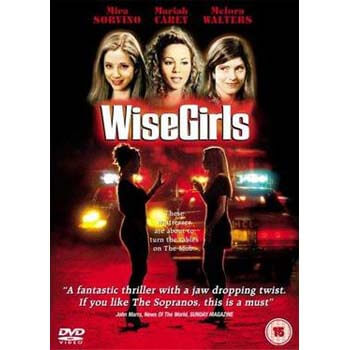 WiseGirls is a 2002 crime film directed by David Anspaugh and starring Mira Sorvino, Mariah Carey and Melora Walters as waitresses working at a restaurant run by mobsters. It premiered at the 2002 Sundance Film Festival. The film was released straight to video and did not receive a theatrical release.

The film centers around Meg (Mira Sorvino), a med student who, after a traumatic experience, moves to Staten Island to live with her grandmother while she gets back on her feet. Her grandmother's care giver, Mrs. Saladino, recommends Meg for a waitress job in a family-run Italian restaurant called 'Santalino's'. There, Meg meets Raychel (Mariah Carey) and Kate (Melora Walters) and becomes fast friends with the two. Not long after starting, Meg discovers exactly what kind of clientele she is serving, the Mob. Meg becomes an adored fixture and valued asset due to her medical training, offering medical advice to several of the mobsters. One night, she becomes the focus of anger from one of the mob men, who slaps her. This leads Frankie (Christian Maelen) and Mr. Santalino to kill the man. Frankie forcibly orders Meg to chop up the body. Now realizing what she has gotten into, she decides she needs to get out as fast as possible. She confides in Kate, and she discovers that Kate is actually an undercover police officer. Meg is then convinced by the police to help them in a sting operation. She is soon discovered and a shoot out ensues in the restaurant. She is believed to be dead. Raychel has moved on to a more subdued life. In the final scene, Kate returns on their birthday, July 11, and reveals that Meg is actually alive, and the girls celebrate the pact that they made the year before.