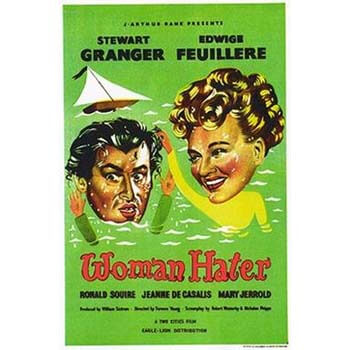 Woman Hater is a 1948 British romantic comedy film directed by Terence Young and starring Stewart Granger, Edwige Feuillère and Ronald Squire. The screenplay concerns Lord Datchett, who invites a French film star to stay at his house but pretends to be one of his employees while he tries to romance her with the help of his butler. When she discovers his subterfuge she decides to turn the tables on him.

Lord Datchett is a misogynist who persuades his friend not to get married. He believes women are vain, trivial and dull. He is irritated when French film star Colette Marly arrives in London and takes the table in a restaurant where he wanted to sit. He is scathing of her claims in the newspaper that she is tired of publicity and of men pursuing her, believing it to be an attempt to get more attention. He predicts that if she were really left alone she would throw herself at the first man she met. After being challenged by a man at his club, Datchett decides to invite her to stay at his house, aiming to stage a "scientific experiment" and prove his theory.

Marly is genuinely weary of her publicity-seeking agent and is besieged by autograph hunters and journalists. When she receives Datchett's invitation to stay at his house, she accepts in the hope of some solitude. After travelling down to his country house with her maid Clair, she is greeted by Datchett's butler Jameson and Lord Datchett who pretends to be Henry Dodds, the estate manager. The other staff have also been informed to help maintain the deception.

Datchett tries to discover more about Marly, but she is initially unforthcoming. Slowly they begin to bond, after they go riding and when they are locked in a cellar for several hours and get drunk on brandy. Clair meanwhile flirts with both Jameson and Patrick, the Irish gardener, provoking them into jealousy and rivalry.

When Reverend Meadows arrives at the house with a christening party for whom Datchett has agreed to be a godfather, Marly discovers Datchett's true identity despite his efforts to deceive her. At first she plans to leave in a fury, but then she decides to play along with Datchett's pretense, intending to teach him a lesson. While out boating on a lake, she pretends to be in distress so that he can be a gallant rescuer, but when he is knocked unconscious, she becomes the rescuer.

Datchett's elderly mother Lady Datchett arrives, and he persuades her to join in the ploy; she tries, without much success. Eventually Marly reveals to Datchett that she knows who he really is. They are both forced to confront their feelings for each other, and he admits he is in love with her. He asks her to marry him, but she reveals it has all been intended to teach him a lesson. He goes away, crestfallen, but she then realises she is in love with him.

At the suggestion of Clair, Marly stages her drowning for a second time. Datchett is about to return to London after admitting the experiment was a failure when he hears her cries for help. He comes to rescue her, but once again it is she who ends up rescuing him. Once safely on the bank, they end up embracing.