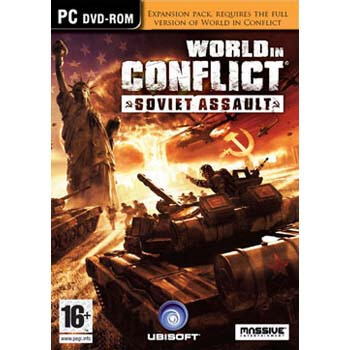 World in Conflict: Soviet Assault is a 2009 expansion pack developed by Massive Entertainment and Swordfish Studios for the 2007 real-time tactics video game World in Conflict. It features the ability to play as the Soviet Union in the single player campaign, against which the player fought in the original World in Conflict as well as adding additional multiplayer maps.

The game is set in an alternate 1989 in which the Politburo of the Soviet Union elects to take military action to sustain itself, rather than collapse. Failing to achieve aid diplomatically, the Soviet Union invades Western Europe and the Pacific Northwest region of the United States. However, in addition to the standard US campaign, the player also assumes the role of Romanov, a lieutenant in the Soviet Army under the command of Colonel Vladimir Orlovsky. Orlovsky also commands two other subordinates in his battalion; his nephew Captain Nikolai Malashenko and old friend Major Valeriy Lebedjev, a KGB officer attached to the battalion. The expansion adds a total of six Soviet missions interspersed between the original game's missions, thus completing the story and acting as an update for the campaign while retaining the original game's units and features.

The World In Conflict Complete Edition and stand alone Soviet Assault Expansion Pack were released in the United States on March 10, 2009, and later on in Europe and Australia on March 12, 2009.

The new expansion features 6 new single player missions and 2 new multiplayer maps. It features new missions in the single player campaign and will integrate these new missions with the current US campaign, meaning the two will be interwoven with one another. The Console versions were to feature voice commands that would allow units to be ordered and deployed onto the battlefield through a headset. However this feature was never implemented for the PC version. The 2 multiplayer maps are available free of charge for owners of the original World in Conflict.

Soviet Assault brings a new Soviet campaign that is entwined with the original World in Conflict campaign, tying up the loose ends in the original campaign.

In 1988, on the verge of total economic collapse, the Soviet Union demands immediate aid from the West. Tensions begin to rise by the next year as negotiations drag on with no discernible end in sight - the Soviets threatening conflict should NATO refuse to comply, who in turn do not believe the Soviet's threat of war as nothing above an elaborate ruse. By the summer of 1989, negotiations fully break down.

In East Berlin, Soviet forces rally under the command of Colonel Orlovsky for what will ultimately be, the first shots of World War III—the invasion and occupation of West Germany. Prior to this, Lieutenant Romanov, the player's character for the Soviet campaign is tasked with leading a team of Spetsnaz commandos into West Berlin to rig explosives on several surface to air missile batteries situated near the Berlin Wall. By early morning, the explosives are detonated followed immediately by the Soviet advance into West Berlin who then proceed to crush the US forces stationed there, achieving the first victory of World War III.

Four months later, the Soviet Union launches its surprise invasion of the Northwestern United States, subsequently occupying Seattle, Washington and its surrounding areas. Colonel Orlovsky returns to command the Soviet expeditionary forces in America, along with his nephew Captain Malashenko, a zealous supporter of the Soviet ideology, and Major Lebedjev, the KGB attache. Romanov is also assigned to the American theatre, and in the first few missions is assigned to the pacification of the surrounding American countryside.

Malashenko adamantly believes that the Soviet invasion of America is being welcomed as liberation. However, the Soviet presence in the United States is, unsurprisingly met with hostility by the civilian population, who form militia groups to assist the National Guard. Malashenko eventually loses his patience with the American proletariat, even going as far as to suggest mass executions by firing squad in order to set an example to the Americans. Orlovsky however, realising that this will only make matters worse for their situation, forbids any firing squads. Despite this, Malashenko intends on proving it will work, but is caught moments before executing several civilians near Eatonville during a counter-insurgency operation. Orlovsky, furious that his nephew would disobey a direct order, warns him that should he step out of line again, he will be court-martialed and sent home in shame.

Prior to the invasion of Seattle, and following the initial Soviet invasion of West Germany, the war is still contained to mainland Europe, which has become somewhat of a stalemate. Very little progress is made on either side of the conflict, prompting the Soviet Union to send Orlovsky to Norway, where he and his Battalion raid an early-warning radar base that will allow the Soviet Air Force to fly bombing missions deep over France and the United Kingdom. The mission is a success, but news soon reaches Orlovsky that NATO troops have entered Soviet territory, near the submarine base at Murmansk. Returning home, Orlovsky and his battalion are tasked with defending a POW camp from a NATO raid. Before the battle though, Malashenko is informed that his wife and infant child have both been killed in a NATO operation (a possible reference to Captain Bannon's actions in the first game). Orlovsky tries to console his nephew, however Malashenko furiously berates the lack of significant progress being made in the war, and the constant lies that the GRU and KGB feed to both the Army and government respectively.

In the wake of the disastrous outcome of Cascade Falls, where the US military had detonated a tactical nuclear device over the town to protect Fort Teller (the headquarters for the supposed Strategic Defence Initiative), Orlovsky leads a weary, battered and nearly totally depleted battalion back to Seattle, to prepare for the inevitable American counterattack. The area in which the battalion must pass through however is crawling with US troops, who use MLRS artillery to harass the retreating Soviets. Romanov is tasked with searching for and destroying the positions, but midway through the mission, Orlovsky finally realises it's futility, and makes arrangements for the battalion to return home. Malashenko, furious at his uncle's actions, shoots and kills him, taking his company to Seattle whilst Major Lebedjev assumes command, who proceeds to evacuate the rest of the battalion back to Russia per Orlovsky's wish.