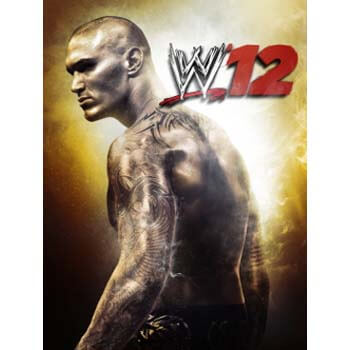 WWE '12 is a professional wrestling video game developed by Yuke's and published by THQ for PlayStation 3, Wii, and Xbox 360 systems. It is the first game in the WWE series and the thirteenth overall in the combined series. It is the sequel to WWE SmackDown vs. Raw 2011 and is succeeded by WWE '13. It is also the first game in the series developed exclusively for the seventh generation of home consoles. It was released on November 22, 2011 in North America, November 25 in Europe, and on January 26, 2012 in Japan. A Europe-exclusive WWE '12 WrestleMania Edition was released on May 25, 2012.

The weak/strong grapple system from the past games has been removed. Characters now perform different moves based on their opponent's current physical state. Players now have a window of opportunity to attack while still in a downed state and can also interrupt moves and Royal Rumble eliminations with attacks. Similarly, the pinning meter from the past games has been reworked to make it more difficult to kick out as a wrestler takes more damage. The game's artificial intelligence has also been adjusted to prevent players from overusing the same move. In addition, the ability to store finishing moves has returned. A new feature called "Dynamic Comebacks" gives players on the verge of losing the opportunity to successfully hit a combination of moves to gain two finishing moves. New "wake up taunts" bring a downed opponent to their feet for a finishing move (such as Randy Orton pounding on the ground before his RKO finishing maneuver). Players also have the ability to target specific limbs during matches and perform submissions through a new "Breaking Point" submission minigame.

WWE Universe, the mode in which players participate in matches and storylines that are booked automatically, returned from the previous year with additional cutscenes. Changed from the previous iteration, the mode allows for players to create a title match on any given date rather than exclusively on pay-per views. Although the ability to change rosters manually is available, the game features a two-week WWE draft event. Storylines that are made can be changed and revamped by including another superstar or diva or by interfering in matches, with some storylines allowing rivalries to turn into alliances and vice versa. The player is also given the option to change SmackDown and Raw into their own original or cancelled WWE shows, though changes are limited for Superstars and shows must remain on the same calendar date. The mode is also improved to strengthen the line of division between exhibition and universe mode, with the former no longer affecting universe mode stats and with the latter's match card being forced to be complete before advancing on to an event, unless the matches are simulated through the Universe Calendar. The mode also allows for players to injure other superstars through uses of multiple finishers or weapon shots. Superstar momentum has also been furthered, with superstars on winning and losing streaks attributes rising and falling respectively.

The "Road to WrestleMania", the mode in which players participate in a pre-scripted storyline featuring actual WWE wrestler voices also returned. Instead of choosing one of a number of different stories lasting three months each, the mode in WWE '12 consists of a single storyline taking place over eighteen months of WWE programming and encompassing two WrestleMania events (27th annual). The mode is split into three acts, the first of which sees the player assuming the role of the villainous Sheamus. The second act is centered around the heroic Triple H and the final act features the player taking control of a created superstar named Jacob Cass (voiced by then-TNA wrestler Austin Aries). The game also includes creation modes for superstars, entrances, finishing moves, storylines, highlight reels, and introduced for the first time create-a-arena where the player can add color to the ring, aprons, turnbuckle, mat, change to steel or normal barricades and add custom logos. With future games having career showcases instead of storyline driven modes, WWE '12 is the final entry in the series to feature the "Road to WrestleMania" mode.