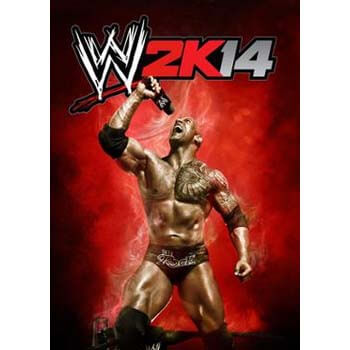 WWE 2K14 is a professional wrestling video game developed by Yuke's and published by 2K Sports for PlayStation 3 and Xbox 360. The box art features The Rock as the cover athlete. It is the first game published by 2K Sports since Take-Two Interactive gained the license from THQ in a bankruptcy filing. It is the sequel to WWE '13 and it is succeeded by WWE 2K15. It is the first game in the WWE 2K series. It was released on October 29, 2013 in North America, October 30 in Japan, and November 1, 2013 in Europe and India. It is the final WWE videogame that featured the scratch logo, first appeared in the Attitude Era, as the company introduced a new logo in 2014, which was originally used as the logo of the WWE Network.

Many of the gameplay features from WWE '13 have been updated. These include the navigation system, allowing for more fluid walking, running and dragging motions. Characters also move faster than previously. Before running, characters display "starting up" animations, to prevent players from spamming running attacks. All chain reversals now result in offensive attacks, to make for quicker matches by avoiding continuous reversal stalemates. Catapult finishers can now be used offensively. Some characters can launch an opponent into the air and catch them for a catch finisher. Seven new OMG moments have been added, allowing certain finishers to be done on two opponents, and players to interact with the arena environment. The nearfall system too has been improved, with more two counts. Few new matches have been added, though a Slobberknocker Mode, adapted from The Streak season mode, had been added as a gauntlet match.

The long-standing mode, "Create-a-Superstar" has been tweaked to have an expanded character save slot that can be filled with up to 100 created superstars. While the mode itself remains much of the same, the ability to use existing superstars as a template for new custom variants has been added. The player continues to have the option to create their own entrances and finishers. The ability to create a custom WWE championship is also available, having been made more reminiscent to previous iterations after having limited creativity in WWE '13.

WWE 2K14 features a new single player campaign called "The 30 Years of WrestleMania", a nostalgia-based gameplay mode that recreates nearly three decades of WWE history, including 45 matches, classic WWE footage and many legendary characters. Like WWE Legends of WrestleMania and WWE '13, the campaign revolves around historical stories rather than original ones. The mode features a distinct roster of wrestlers and alternate gimmicks, who wrestled at WrestleMania (especially in main events).

In Wrestlemania mode, matches have primary objectives, required to beat the game, and bonus historical objectives, which result in recreated WrestleMania moments. Sometimes, the player must follow a guided sequence of inputs, rather than freely control the character.

In 45 primary matches, the player competes through storylines of various lengths, switching predetermined characters as they are completed. Each chapter has its own title and focus; "Hulkamania Runs Wild" focuses on Hulk Hogan and early WrestleManias, while "The New Generation" showcases the rise of Bret Hart and Shawn Michaels in the mid-1990s. The "Attitude Era" chapter brings back some matches from WWE '13's "Attitude Era" mode, as well as some not covered before. The "Ruthless Aggression" chapter focuses on the departure of The Rock, lessened focus on Triple H and rise of John Cena. The final "Universe Era" chapter focuses on the rise of Randy Orton and the returns of The Rock and Brock Lesnar.

The game has a mode that focuses on The Undertaker's WrestleMania winning streak of 21 matches (21-0) at the time of the game's release. In "The Streak" mode, the player chooses to defend the streak as The Undertaker, battling waves of opponents, or to attempt to break it, with any character. When facing The Undertaker at WrestleMania, the difficulty level is higher than in any previous WWE game. The Undertaker can chokeslam the player if grappled at the head, submit the player with the Hell's Gate when The Undertaker is grounded and can appear once behind the player in an animation previously used for if the Undertaker interferes in a match, if he has a finisher stored.

The sandbox mode, "WWE Universe", returns, though overhauled to a degree. Continuing the previous features, players get the option to customize existing WWE Shows, bring back retired series or create their own original shows and choose the superstars participating and the titles available. The ability to choose the status of a WWE superstar, whether assigned to one show, several, a legend or a free agent is also available. The ability to delete shows is once again present, as is a further renovated WWE statistics system. The ability to reset a Universe Mode, should it get too "clunky" is once again available. Continuing the ever expanding story mode options, WWE 2K14 offers the most control in customizing a player's "universe" by giving them more control over storylines through a new Rivalry Manager. Corroborating with the statistics tracker, the Rivalry Manager can stat-track all the rivalries as well divide storylines into periods based on dates during which period the rivalry will continue depending on in-ring decisions. All the previous storylines from earlier WWE games containing Universe Mode are present, but have been revamped to fit into the Rivalry Manager.