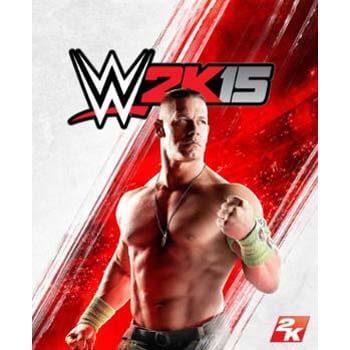 WWE 2K15 is a professional wrestling video game developed by Yuke's and published by 2K Sports for PlayStation 3, PlayStation 4, Xbox 360, Xbox One and Microsoft Windows. It is the sequel to WWE 2K14, and was succeeded by WWE 2K16. It was released on October 28, 2014, in North America and on October 31, 2014, in Europe for last generation consoles and released on November 18, 2014, in North America and on November 21, 2014, in Europe for current generation consoles. It was released for Microsoft Windows on April 28, 2015, and was the first WWE game to be released on the platform since WWE Raw, which was released in 2002. It is the first game in the series to use the new WWE logo since it was introduced earlier in 2014, which was originally used as the logo of the WWE Network.

The game is based on the professional wrestling promotion WWE and WWE 2K15 serves as the first game in the series to signify the "new generation", placing a heavy emphasis on traditional and more relaxed gameplay, unlike the arcade-like combat prominent in previous installments. It also adds several new features to complement the main theme based around naturalism, adding a new chain grapple system at the beginning of matches, slowing the pacing of the matches and adding a new stamina bar to reflect and portray the quality of matches produced on WWE television.

WWE 2K15 signifies as the start of a "new generation", which focuses on turning the franchise into a true wrestling game rather than "a fighting game with WWE Superstars in it." The new chain wrestling mini-game has been implemented (exclusive to current generation consoles and PC only) to make matches play out more realistically. Pressing the grapple button at the beginning of the match will initiate a collar-and-elbow tie up. At the beginning of the tie up, each opponent will press one of three face buttons to place their opponent into a side headlock, a wrist lock or a waist lock with a rock-paper-scissors style outcome. (Headlock beats Wrist lock, Wrist lock beats Waist lock, Waist lock beats Headlock.) Whomever wins will place their opponent in the corresponding hold, while both players rotate the right analog stick (space + movement keys on PC) to find a "sweet spot". If the attacker finds it first, they'll perform a move, if the defender finds it first, they'll gain the upper hand. Additionally, the attacking wrestler can strike or wrench the opponent's limb, making it harder for them to find the sweet spot. This mini-game only happens 2-3 times during the match and can be turned off via the options menu. Strikes have returned to their normal speed, with the improved collision and selling animations from the opponent. Unlike in previous games, superstars will not stand up immediately, after taking a bump or slam. They will occasionally stay down for seconds based on their stamina.

This game also introduces the three-tier stamina meter, which controls the pace of a match. Through each move the player performs, especially striking and running, will drain the stamina meter. During the first tier, the wrestler will be full of energy and perform moves easily. During the second tier, the wrestler will begin to slow down. In the third tier, the wrestler will be completely exhausted, even being unable to perform their finishing moves should it drop too low. The stamina meter can also be turned off or adjusted to drain more slowly, and will slowly regenerate as long as a meter is not depleted. The game's submission system has been revamped. The "Breaking Point" gauge has been replaced with a two part circular gauge. The mechanic of the system remains mostly the same, but players only have to mash a single button rather than all four. Wake-up taunt finishers are now known as "Charged Finishers" which combines the taunt & finisher into a single animation by pressing and holding the finisher button when the opponent is grounded and then releasing it when they're on their feet (whereas on PC, holding the key is not necessary). Signature moves can now be stored as well. Catch and Catapult finishers have also returned. Both fighting styles and skill sets have been brought in to ensure that the characters behave more like their real-life counterparts. For example, high flyers like Rey Mysterio will not do power moves and will focus on diving and springboard moves while giants like Big Show cannot climb the turnbuckle and will focus on power moves. Superstars who cannot climb to the top rope can climb to the second rope and deliver moves such as Bret Hart's elbow drop or Big Show's slingshot body splash.

Gameplay on the PlayStation 3 and Xbox 360 versions remains largely the same blueprint as previous entries in the series. However, new rosters, new arenas, new championship titles and new contents have been introduced.

Match types for all versions have been significantly enhanced. The Hell in a Cell match now allows the usage of weapons obtained from under the ring. New match types (only playable in Showcase Mode) include the Three Stages of Hell match and the Casket Match.

WWE 2K15 marks the video game debuts of 13 characters. The game features 76 playable characters. The in-game roster is the subset of the entire group and is smaller than the last year's game.

On August 4, 2014, IGN revealed that the game will feature a historical mode, which focuses on past WWE rivalries. Called the "2K Showcase", the story mode is similar to WWE 2K14's 30 Years of WrestleMania mode in that it focuses on historical events, but will be more like the Attitude Era mode in WWE '13 where it emphasizes specifics rather than generalities. The mode goes into more depth, giving a more detailed look at personal rivalries, treating them as mini-documentaries, with in-match cut scenes and historical objectives to complete.

The 2K Showcase features 33 matches in total and is highlighted by two rivalries. The first rivalry "Hustle, Loyalty, Disrespect" is between John Cena and CM Punk from 2011 to 2013. The rivalry started with Punk beginning to rebel against Vince McMahon and the way he ran the company and later when he claimed he did not earn the respect he deserved. The rivalry ends with CM Punk's defeat by John Cena at Raw.

The second rivalry "Best Friends, Bitter Enemies" chronicles the feud between Triple H, Shawn Michaels and the wrestling stable Evolution. The showcase begins at SummerSlam (2002) and covers various matches from Raw and PPV's ending with Triple H defeating Shawn Michaels at Bad Blood 2004 in a Hell in a Cell match.

The 2K Showcase also allows players to unlock various arenas, wrestlers and attires from each rivalry period, including Triple H's 2003 and 2004 attire and the stable Evolution from 2004.

WWE 2K15 has three additional Showcases, which were available as DLCs. "One More Match" features the rivalry between Christian and Randy Orton during 2011, focusing in on Christian's quest for the World Heavyweight Championship.

Hall of Pain features Mark Henry's domination through 2011 and early 2012 and his path towards winning the World Heavyweight Championship and his brief resurgence challenging for the WWE Championship in early 2013.

The game also has a "MyCareer" mode similar to NBA 2K15. Players take on the role of a Superstar made in the Creative Suite and follow the evolution of their WWE career, from the WWE Performance Center and NXT to the main event at WrestleMania, then your career is simulated 15 years into the future where you take place in one final match. This is the first time that the WWE 2K series features a Career mode and the first for the series overall since SmackDown vs. Raw 2010. Designed to be a branching, but linear, storyline in which players actions have effects on the future, MyCareer is reminiscent to story modes of earlier SmackDown games and WWF No Mercy in which decisions affected outcomes. The mode also features a morality system to allow players to decide whether they want to play as a face (fan favorite) or a heel (rule breaker) with each choice having an effect on the meter. There is also a 1-5 star match rating system that rates matches based on technique, pacing and momentum, with squash matches getting lower ratings and back-and-forth matches getting higher ratings. Wins and losses have little effect on match ratings with the goal being to put on the best match possible. This mode is exclusive to the PlayStation 4, Xbox One and Microsoft Windows versions of the game.

Replacing MyCareer on PlayStation 3 and Xbox 360 is a mode called "Who Got NXT?" which is a story mode focusing on up-and-comers from NXT: Adrian Neville, Bo Dallas, Corey Graves, Rusev and Sami Zayn, the 5 playable NXT Superstars in the game. The NXT Arrival arena was also exclusive to the PS3/360 version of the game.

Designed to be the spiritual successor to "Defeat The Streak" from WWE 2K14, Proving Ground pits players against John Cena, the top guy in WWE. This mode is only unlockable after completing the "Who Got NXT?" mode. The player will choose one of the 5 playable NXT Superstars to face Cena in a one-on-one match with a 30-minute time limit. Defeating Cena with all 5 NXT stars will unlock the entire roster (including created Superstars) to play the mode with.

Several features that were present in previous games like: Story Designer, Create-A-Finisher and Custom Soundtracks were removed from the PlayStation 3 and Xbox 360 versions for unknown reasons nor are they present on next gen consoles though Create-A-Diva, Paint Tool, Create-A-Championship & Create-An-Arena are still available on last gen.

Create-A-Superstar has returned with only 25 available slots for the Xbox One, PlayStation 4 versions while the PC version has 50 slots when the player updates the game on Steam. Superstar Heads has been reworked to allow all in-game wrestlers to be fully editable for the first time since WWE Raw 2, creating or editing a superstar takes up a slot. The paint tool has been removed on Xbox One, PlayStation 4 and PC and replaced with a new feature called "Superstar Studio" that allows players to import custom logos and fully edit or change a superstar attire.