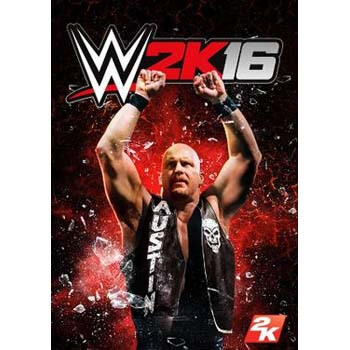 2K announced on their social media accounts that WWE 2K16 will feature the "largest roster in the game's history", featuring over 120 unique playable characters, nearly double the 67 that were in last year's game. A developer for the game then clarified that the 120 unique playable characters count does not include potential DLC, and that all 120 characters are included and will be released with the game. 2K revealed that despite "push(ing) as hard as we could" to include them, for "various reasons," Sasha Banks, Charlotte, Becky Lynch, and Bayley (the Four Horsewomen of NXT) will not be in the game or included as DLC. 2K also revealed that WWE denied them the inclusion of Cody Rhodes as himself in the game, though he was included as his Stardust gimmick. Hulk Hogan was announced as being part of the game, but was cut late in development due to the release of controversial racial statements he had made previously. 2K16 features 26 superstars making their WWE games franchise debut.

The commentary team has been expanded to three members, with John "Bradshaw" Layfield joining the returning Michael Cole and Jerry "The King" Lawler. Jim Ross returns to call matches alongside Lawler in the Steve Austin showcase. The game features new cloth physics and animations, creating more realistic attire. The variety of the crowd has been improved as well. Hair physics and sweat features have been improved. In the PS3 and Xbox 360 versions, only Michael Cole and Jerry "The King" Lawler are present for commentary outside of Showcase mode. WWE 2K16 features a licensed soundtrack that consists of twelve songs as well as users can use entrance theme song of superstar/Diva to be played in the menu.

The 2K Showcase mode also returns, with the showcase detailing the career of the cover star "Stone Cold" Steve Austin. A second showcase becomes available only with purchase of the 'Hall of Fame' DLC pack, a collection of classic matches featuring each of the WWE Hall of Fame Class of 2015 entrants (excluding Arnold Schwarzenegger).

MyCareer returns from 2K15, with 2K claiming the mode will be significantly expanded from last year's game. The mode is only available on PlayStation 4, PC and Xbox One. Several changes have been made in order to give the player more control over their superstar. The character's personality can be influenced through actions, such as forming alliances and rivalries. The Authority are featured in the mode, with the player having the option to support or defy them, causing their career to be influenced. Players are also able to interfere in other superstar's matches in order to create rivalries.

WWE Universe mode allows the player to create their own WWE shows and pay-per-view events, allowing them to create rivalries and feuds for singles wrestlers and/or tag team wrestlers, and will let them create custom arenas and championship titles.

Players can have a variety of different matches with other players online. The online mode was discontinued on May 31, 2017 after 2K's announcement on Twitter.

Create a Diva, Create a Show, Create an Arena, and Create a Championship features that were removed in WWE 2K15 have returned in 2K16. The create a superstar feature includes several new features, such as hair dye, change material properties (for example, having a mask or shirt be vinyl, cloth or satin) and new face photo importing tool. The amount of available save slots for created superstars has been increased to 100, the same number as in 2K14 and four times the amount available in 2K15.