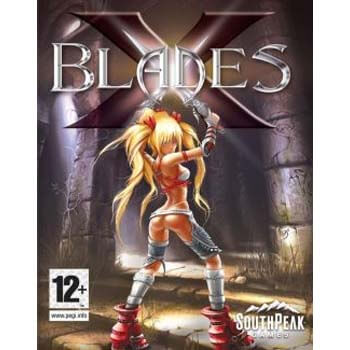 X-Blades is an action-adventure game for the PlayStation 3, Xbox 360 and Microsoft Windows. The player assumes the role of Ayumi who wields two pistol-blades. The game was developed by Gaijin Entertainment and was published by SouthPeak Games and TopWare Interactive. It was later released for macOS and Linux on January 20, 2017. The game was originally released in November 2007 by 1C Company in the Russian language for Microsoft Windows, under the title Oniblade (Ониблэйд).

A reboot/sequel, Blades of Time, was released in March 2012.

X-Blades is a hack-and-slash style action-adventure game in which the player must fight monsters, using a pair of gun blades and spells, through indoor and outdoor levels in order to progress. Monsters are encountered in both preset numbers and in areas with Monster Generators which spawn both standard and boss opponents until they are destroyed. Power-ups and coin fragments which grant different upgrades are hidden throughout the game. Power-ups include combat techniques, magic, weapon enhancements, and teleportation. Also earned throughout the game are souls, that function as experience points which can be converted into skills. The skills range from Area of Effect attacks to weapon enchantments. These skills are of either "light" or "dark" alignment and the use of them has an effect on whether the player receives the "light" or "dark" ending.

Long, long ago, in an age that only the gods can now remember, the universe was ruled by two powerful beings that were revered and worshipped by all races – but the brotherly relationship between these two creatures was always in question from the beginning of time, simply because no one knew who the real number 1 was. While the Enlightened was on the side of good, helping his people how and when he could, the Dark One was quite the opposite, full of hate and devilish works – and so the never-ending battle between the Enlightened and the Dark One persisted for centuries. Humans suffered terribly thanks to this constant combat between the two – combat which shook the universe to its very core. Finally, thanks to a trick, the Enlightened succeeded in banishing the divine power of the Dark One, imprisoning it in an Artifact – but in doing so, the Enlightened lost his own divine powers, because the two divine beings were inseparably linked to one another. This is how two Artifacts came to be hidden in a huge Temple – and how the Enlightened prevented the downfall of the entire universe. However, these two artifacts contain total, absolute power – both good and evil. Any human being who comes in contact with the powerful stones will be horribly cursed – and the power of darkness will once again be awakened.

The game begins when a map which has been lost for countless years suddenly turns up – and it shows the location of the artifacts. The adventurer Ayumi starts searching for the immensely valuable stones. Powerful forces against which she is helpless threaten to awake in her body. Now it's up to her to discover what the secret of the curse is – and at last defeat the darkness.

Ayumi uses the map to find her way to some ruins. In the heart of the ruins lies an artifact guarded by the Light, a lion-like being, who warns her that the power of the artifact is life-threatening to humans. Ayumi ignores the warning and touches the artifact anyway. A black ooze infects Ayumi with a curse, causing the Light to try to kill her. She fights the Light but is defeated when she is overwhelmed by the agony of the curse. She finds herself in a white void but is overwhelmed by the black ooze.

Ayumi awakes on an abandoned coastline. She eventually makes her way to a gazebo in the nearby ruins and finds herself trapped in it as it is filled with spikes. She is rescued by Jay, an adept of the Light, who is searching for an artifact of the Light. Ayumi speculates that this might be able to cure her curse, and Jay offers to try to cure it himself. Instead, he provokes a violent reaction by the curse and flees. Ayumi makes her way to the Artifact and finds that it is guarded by the Dark, who is battling Jay. The Dark wounds Jay and then turns to attack Ayumi, hoping to regain his lost power. She defeats him and touches the Artifact. She finds herself once again in the white void, but this time is accompanied by the Light, who wakes her up.

She wakes up, discovering that the curse is gone. However, Jay is furious, saying that the curse had not been destroyed, merely, displaced. He then runs off. Ayumi eventually makes her way to the gates of a castle, where she again faces the Dark. The gates to the castle are broken down by Jay, who is now possessed by the dark magic of the curse. He destroys the Dark and takes its power. Ayumi and this Dark Jay fight, with Dark Jay retreating into the castle. Ayumi follows, facing him in the main hall of the castle.

In the "Bad" Ending, Ayumi kills Jay. She mourns his death, wishing that she could have done differently.

In the "Good" Ending, Ayumi knocks back Jay and is overwhelmed by the power of the Light. This power overwhelms Jay as well. The two ascend in spheres into the sky. A flash of light then explodes outword, purging the power of the Dark from the world. Ayumi and Jay are then seen watching the sunrise together.