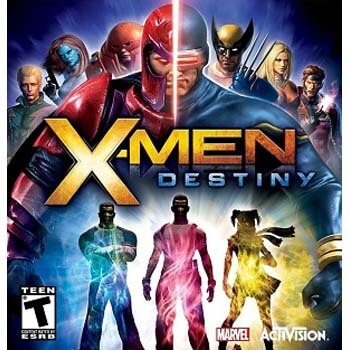 X-Men: Destiny is an action role-playing video game based on the X-Men comic book series. It was developed by Silicon Knights. Written by Mike Carey, the writer of the X-Men: Legacy comic book series, it was published and released by Activision for the Nintendo DS, PlayStation 3, Wii, and Xbox 360 consoles.

Along with many other games published by Activision that had used a Marvel license, X-Men: Destiny was de-listed and subsequently removed from all digital storefronts on January 1, 2014. The game and another game, Too Human, were recalled, and had their unsold copies destroyed due to legal issues between Silicon Knights and Epic Games over the games' use of Unreal Engine 3 code.

In X-Men: Destiny, players are put in the roles of new mutants who choose to join either the X-Men or the Brotherhood of Mutants; from there, they make decisions for the ultimate destiny of their character. X-Men: Destiny places an emphasis on the players' freedom of choice, as opposed to a more traditional linear type of gameplay. This was supported by quotes in the official press release: "the all-new original video game casts players as new mutant recruits in a rich, branching storyline that features a deep element of choice and gives players ultimate control of their destiny".

Throughout the game, players collect power enhancements called X-Genes. Every X-Gene can unlock three types of abilities: offensive, defensive and utility. X-Genes can be mixed and matched as the player sees fit for a unique experience.

In X-Men Destiny San Francisco has been divided into human and mutant areas due to conflict. The player chooses from one of three mutant characters who have been created for the game. Player choices affect which mutants become their allies and enemies through decisions made in the course of the story.

The game begins at a peace rally in memory of the deceased Professor X, seen through the Mutant Response Division's Chief Luis Reyes. Things quickly turn when the rally is attacked by an anti-mutant extremist group called the Purifiers, who are kidnapping mutants, not killing them as they usually do. The latent mutant powers of the player character are awakened, and they are forced to defend civilians from the Purifiers. The player character then meets with mutants from both the X-Men and Brotherhood of Mutants and chooses to join a group as they go after Cameron Hodge, leader of the Purifiers. Hodge is wearing a suit of power armor and personally joins the hunt for mutants. The player eventually corners Hodge on top of a building but is interrupted by Magneto, accused by Reyes of attacking the rally, who drops the Golden Gate Bridge on top of the combat zone.

The player character is saved by Nightcrawler at the last second and is teleported to Chinatown, where they are tasked with finding Gambit, who is currently operating a nightclub nearby. After meeting Gambit, he asks the player to help him raid a Purifier warehouse which contains technology used against mutants. After the raid, Gambit gives the player character the location of the secret underground lab where Purifiers hold captured mutants. At the lab, the player character meets several captured mutants such as Quicksilver, Surge and Colossus. With their help John Sublime and the U-Men are defeated, and the captured mutants are rescued. Acting on information gained by the X-Men, the player character goes to a secret underground base used by Hodge and the Purifiers. They find Hodge, who is now wearing a more powerful power armor containing drained mutant powers. Hodge boasts that the powers drained from Pixie and Caliban will allow him to find any mutant, and that he is being helped by some other group or person. After the fight, Hodge falls from a generator tower to his apparent death.

Depending on the player's choice between the X-Men or the Brotherhood of Mutants, they goes to either Cyclops or Mystique with the new-found information and are tasked with finding Pixie and Caliban. With the aid of Forge, the player character finds Caliban and realizes that Hodge's ally is Bastion, the robot who killed Professor X before being destroyed by Magneto. Bastion somehow survived and uploaded himself to the MRD satellite, and even Reyes is working for him. With Caliban's help, the player character finds Pixie. Still, the helicopter carrying her is shot down by a laser beam and crashes, killing her. Immediately after, regardless of the player's choices so far, Magneto accuses Cyclops of shooting down the helicopter and, alongside Juggernaut, attacks both Cyclops and the player. After the fight, Magneto grudgingly gives the player character a chance to join the Brotherhood, and they are forced to make an important decision.

Regardless of which side the player chooses, they are tasked to take down Reyes, who seems to have mind control powers. Reyes plans to amplify his power with Bastion's satellite so he can control all humans and mutants on Earth. After fighting several allied mutants and saving them from Reyes' mind control, the player finds the broadcasting tower used by Reyes and shuts down the signal with the aid of Cyclops and Magneto. Bastion downloads himself into Reyes, now wearing an enormous version of Hodge's armor, and takes control of his mind. Bastion also sends several Sentinels to join the fight. After the player defeats Reyes and his Sentinels, Reyes surrenders himself to the authorities, to which the player character responds that they are the authorities now.

The ending depends on which side the player chose to join at the end of Chapter 7.