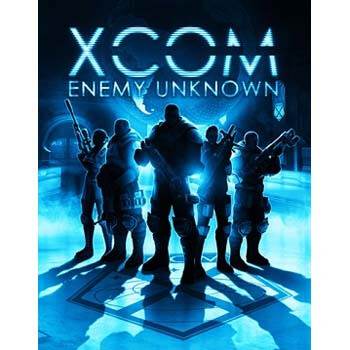 XCOM: Enemy Unknown is a 2012 turn-based tactical video game developed by Firaxis Games and published by 2K Games. The game is a "reimagined" remake of the 1994 cult classic strategy game UFO: Enemy Unknown (also known as X-COM: UFO Defense) and a reboot of MicroProse's 1990s X-COM series. Set in an alternative version of the year 2015, the player controls an elite multinational paramilitary organization called XCOM during an alien invasion of Earth. The player commands troops in the field in a series of turn-based tactical missions; between missions, the player directs the research and development of technologies from recovered alien technology and captured prisoners, expands XCOM's base of operations, manages finances, and monitors and responds to alien activity.

XCOM: Enemy Unknown was critically acclaimed, with several reviewers commenting on the game's difficulty, replayability, and addictiveness. A number of publications, including GameSpy, GameTrailers and Giant Bomb, named it Game of the Year. A sequel to the game, titled XCOM 2, was released on February 5, 2016 for Microsoft Windows, OS X, and Linux.

The turn-based ground combat uses a top-down 3D perspective. The player controls a squad of between one and six human soldiers or robotic units as they hunt the aliens on the map and attempt to complete other objectives dependent on the mission. Map layouts are not randomly generated, but enemy placement is. Fog of war hides the aliens and their actions from view until the player's soldiers are in range and have line of sight on them, and enemies normally do not act at all until the squad initially comes within line of sight. Soldiers can carry items and perform special abilities; use of these items and abilities is controlled through a toolbar on the head-up display (HUD). A few examples of abilities include firing on enemies automatically after they emerge, launching explosives, and healing allies.

Soldiers can take cover behind walls and objects in the environment to gain a measure of protection. Units can use suppressive fire to disadvantage enemies, and use active camouflage to maneuver around opponents. Cutscenes and dynamic camera movements emphasise particularly exciting gameplay moments, such as kill sequences and use of special abilities. The game includes some tactical role-playing elements, whereby the player's soldiers can gain abilities as they survive more battles.

The game's strategy element occurs between missions. XCOM's underground headquarters is presented in a view dubbed the "ant farm". From this view, the player manages construction, manufacturing and research projects underway, and directs how the scientists and engineers use resources recovered from missions and received from XCOM's sponsors. A holographic view of the Earth called the "Geoscape" allows the player to keep track of the situation around the world, ordering aircraft to intercept UFOs and dispatching soldiers to engage aliens on the ground.

This influences the panic level of XCOM's member nations. Responding to situations in certain areas decreases panic, and ignoring them results in a rise in panic and potential for the nation to pull out of XCOM. The "ant farm" also allows the player to observe the team of soldiers relaxing or exercising at the base's gym. A memorial wall to soldiers killed in action is also viewable. Passive bonuses are provided depending on which continent the player chooses for a base location. The player can better detect alien activity by launching satellites and positioning them over territories of interest.

The game can be played on higher difficulty levels: Classic (in a reference to the original game) and Impossible, each with the option to enable the "Ironman" option (which limits players to a single save file) separately for each. Jake Solomon, lead developer, stated on numerous occasions that he believes that the "truest XCOM experience" is playing without the ability to reload saved games. On the higher difficulty levels, the random nature of battles, where soldiers under the player's command can permanently die from one enemy attack, the against-all-odds nature of combat against the unknown and technologically superior enemy, and the requirement to sacrifice some resources – including soldiers and even entire countries – for the greater good combine to create a bleak atmosphere where the player feels the weight of command.

The game features a multiplayer mode for one-on-one tactical battles. Players spend a predefined points budget on assembling a squad of up to six humans, aliens, or a mixture of both. Human units are customizable in terms of weaponry, armor and gadgets. A simplified version of the single-player perk system is present. Alien units may not be customized but possess the abilities of corresponding aliens types in the single-player mode of the game.

Although there are some differences in the interface between platforms, unlike other games such as Firaxis' Civilization Revolution, the content is not simplified for the console versions. The PC version features a mouse-driven UI.

The game's campaign begins in the spring of 2015, as a global alien invasion begins. Prior to the start of the game, a group of countries called the Council of Nations has banded together to create XCOM (short for Extraterrestrial Combat Unit), the most elite military and scientific organization in human history, tasked with defending them from the alien attack. The player assumes the role of the commander of XCOM, and proceeds to engage in a war against an extraterrestrial enemy with overwhelming technological superiority.

After success with shooting down alien scout ships and securing the crash sites from surviving alien crews, as well as interdicting alien attempts to abduct human civilians for unknown purposes, XCOM manages to also obtain the corpses of various different alien troops. Autopsies reveal that all these types have been genetically and/or cybernetically altered, which seems to indicate they are merely foot-soldiers for unseen leaders. XCOM's head of research, Dr. Vahlen, requests that a live alien be captured for interrogation. This also involves developing a specialized weapon capable of capturing a live alien, and constructing a facility in XCOM's subterranean base capable of safely holding a live alien prisoner.

Capturing one of the alien troops and conducting the interrogation reveals vague information about another type of alien called the Outsiders, artificially-created crystalline beings encountered aboard UFOs, that appear to serve as pilots and navigators. Dr. Vahlen then requests that XCOM capture an Outsider for study. Upon capturing one of these, the examination reveals that the Outsiders' exotic crystalline structures behave in a manner similar to antennas, receiving a signal broadcast from a location buried underground on Earth. XCOM dispatches a team to investigate the signal; it is found to be coming from a base that the aliens have secretly established on Earth, where experiments are performed on abducted humans.

XCOM develops a method for gaining entry to the alien base and assaults it. During the mission, the alien serving as the base commander is discovered to have psychic abilities, but is nevertheless defeated by the soldiers. The commander's psychic communication device is recovered and reverse engineered. Tapping into the aliens' communications reveals a previously hidden, stealth "Overseer" UFO making rounds across the Earth. When the UFO is shot down, it is found to hold an alien species that had not been previously encountered, as well as a strange psionic artifact. The newly discovered species, called Ethereals, possess powerful psionic abilities.

Once the Overseer ship is shot down and the psionic artifact recovered, the massive enemy "Temple Ship" reveals itself in low Earth orbit over Brazil, and starts causing earthquakes even as far away as XCOM HQ. The reverse-engineering efforts enable XCOM to unlock and develop latent psionic powers that are present in certain human beings, thus enhancing their human soldiers. Out of these psychic human soldiers, the most powerful becomes the Volunteer, using the psionic artifact recovered from the Overseer UFO to tap into the aliens' psychic communication "hive", an experience that also increases his or her psionic strength. This allows them to attack and board the Temple Ship to seek out the Uber Ethereal, the leader of the alien invasion.

During the final battle aboard the ship, the Uber Ethereal reveals that, because of their own failure to improve their own race further, they have been testing and experimenting on other species throughout the universe in an attempt to identify a race worthy of being "Uplifted", searching for a race that is strong in both mind and body; the various species of alien troops that the player has encountered have all been failures in the Ethereals' experiments. By allowing humans to obtain their technology a few steps at a time, the Ethereals allowed humans to evolve to a fuller potential, and believe that humanity may be the culmination of their search, to find the perfect species to move on and prepare for "what lies ahead", a vaguely worded destiny that they do not describe further.

After slaying the Uber Ethereal, the Temple Ship begins to collapse into itself, creating a black hole, which would destroy the Earth due to its close proximity. While the psionically gifted Volunteer urges the other XCOM soldiers to rush back to their transport and escape the doomed ship, the Volunteer stays behind, using the psychic gift to take control of the ship and fly it further away from the planet, finally causing it to self-destruct and save Earth, though at cost of the Volunteer's own life.