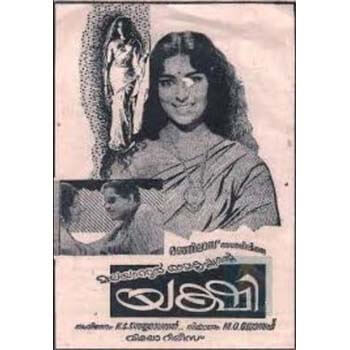 Yakshi is a 1968 Malayalam horror psychological thriller film, directed by K. S. Sethumadhavan and written by Thoppil Bhasi, based on Malayattoor Ramakrishnan's much acclaimed novel of the same name. It stars Sathyan, Sharada, Adoor Bhasi, N. Govindan Kutty, Bahadoor, Ushakumari, Sukumari, Rajakokila and Radhika. It is the first psychological thriller in the history of Malayalam cinema.

The story is about a college lecturer Sreenivasan (Sathyan), who is doing research on the Yakshis. He is disfigured in an accident in his college lab, while experimenting with acids. Everyone who used to adore him begins to hate him and keep away from him for his looks. He meets a beautiful woman, Ragini (Sharada). She is willing to accept him despite his disfigurement. Sreeni marries Ragini and they lead a happy life. But after a while, Sreenivasan has doubts about the identity of his wife; he suspects that she is a "Yakshi". He dreamed that Ragini wants to kill him for immortality. Sreeni allowed her to take his life, but because of the strong passion and love towards Sreeni, Ragini lets him live and disappears. When Sreeni woke up from the dream, some cops take him to a psychiatrist on the basis of the missing of Ragini and Sreeni's retarded behaviour. Sreeni told to the cops that, Ragini is a Yakshi and disappeared in front of him. But no one believes him. The psychiatrist revealed to the cops that, Sreeni is mentally unstable because of his constant thoughts about Yakshi. Actually, Sreeni (because of his mental imbalance) killed Ragini by thinking, she's Yakshi. At the end of the film, Sreeni admits to the cops, "I love my Ragini,I killed her, I'm a Psycho..".