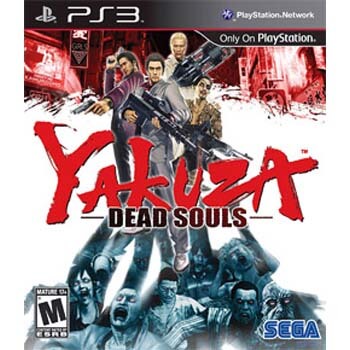 Yakuza: Dead Souls (Japanese: 龍が如く OF THE ENDオブ ジ エンド, Hepburn: Ryū ga Gotoku OF THE END, "Like a Dragon of the End") is an action-adventure survival horror video game, developed and published by Sega for the PlayStation 3. The game is the sixth installment in the Yakuza series. The game was originally scheduled for release in Japan on March 17, 2011 two days after the release of Yakuza 4 in North America; however, after the 2011 Tōhoku earthquake and tsunami, the release was indefinitely delayed. A new release date, setting the game's release for June 9, was announced on April 7. The game was also released in North America and Europe by Sega in March 2012.

Dead Souls is a non-canonical side story set during April 2011, one year after the events of Yakuza 4. A sudden outbreak causes the residents of Kamurocho to become zombies, biting victims to continue spreading the plague. Kamurocho is slowly quarantined as the Japan Ground Self-Defense Force is called in to contain the infection. In the wake of the outbreak, four men take charge to help the people of Kamurocho and find the source of the disease: Shun Akiyama, a local loan shark attempting to rescue his sick receptionist; Goro Majima, a feared yakuza and construction company owner trying to stave off his own infection; Ryuji Goda, a disgraced former yakuza and takoyaki chef whose clan has ties to the outbreak's origins; and Kazuma Kiryu, an orphanage caretaker and legendary former yakuza forced to return when his adopted daughter Haruka is kidnapped.

The game features four playable main characters. Series protagonist Kazuma Kiryu returns, as well as Goro Majima, a recurring character since the first installment. Ryuji Goda of Yakuza 2 and Shun Akiyama, one of the four main characters in Yakuza 4, are also playable characters. The story is divided into four parts with four chapters each, with players controlling a different character during each part, along with a final seventeenth chapter focusing on Kiryu.