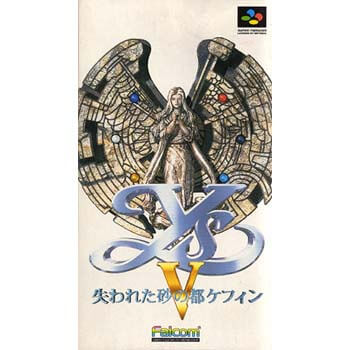 Ys V: Lost Kefin, Kingdom of Sand (イースV 失われた砂の都ケフィン, Īsu Faibu: Ushinawareta Suna no Miyako Kefin) is an action role-playing video game for the Super Famicom developed by Nihon Falcom. It is the fifth game in the Ys series of video games.

An updated version was released for the Super Famicom in 1996, and a full remake was made for the PlayStation 2 in 2006.

Adol is travelling through new lands, in search of more adventure, when he hears of the vanished desert city of Kefin. He sets off to investigate this ancient city's disappearance.

The RPG-style statistical elements and the overhead view of most of the previous games are retained in Ys V. As in Ys III, there is no auto-attack; the player must press a button to swing Adol's sword. Adol is also given the ability to jump and defend with his shield.

A new magic system is introduced in Ys V as well, which requires the player to charge up spells by holding a button before they can be cast.