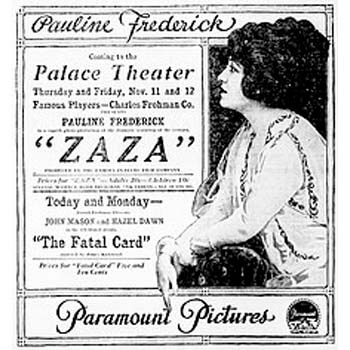 Zaza was a 1915 American silent romantic drama film produced by Famous Players Film Company in association with the Charles Frohman Company, and distributed by Paramount Pictures. The film was directed by Edwin S. Porter and Hugh Ford and stars Pauline Frederick in the title role. The film is based on the 1899 French stage play of the same name that starred Mrs. Leslie Carter, and the American adaptation by David Belasco.

Zaza's original release date was scheduled for October 4, 1915. However, a nitrate fire at the Famous Players studio on September 11, 1915 caused the film's release to be delayed until November 11. The film is now considered lost.