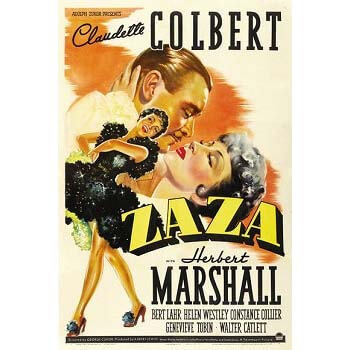 Zaza is a 1939 American romantic drama film made by Paramount Pictures, and directed by George Cukor. The screenplay was written by Zoë Akins, based on the play Zaza. The music score is by Frederick Hollander. The film stars Claudette Colbert (who had replaced Isa Miranda) and Herbert Marshall.

The story was filmed by Paramount in a 1915 version with Pauline Frederick, and previously remade in 1923 with Gloria Swanson.

A glamorous female singer (Colbert) has an affair with a married man (Marshall).