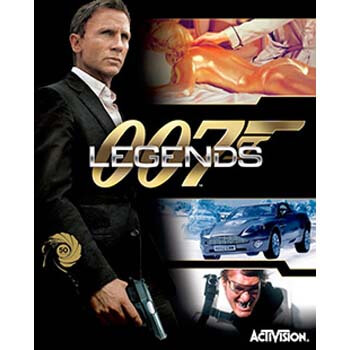 007 Legends is a first-person shooter video game featuring the character of British secret agent James Bond. It was developed by Eurocom and released by Activision on October 2012 for PlayStation 3 and Xbox 360, November 2012 for Microsoft Windows and December 2012 for Wii U. The game is available as physical optical disc media, as well as a digital release download via PlayStation Network and Xbox Live Marketplace on date of release, though it was removed off all other digital stores without warning in January 2013. The PAL Wii U version of the game was released in some parts of Europe on 6 December 2012, and in the United Kingdom on 21 December 2012. The release was cancelled in Australia.

The game was released to coincide with the fiftieth anniversary of the James Bond film series. To achieve this, the single player campaign includes one mission from each of the six actors' eras, being Goldfinger (Sean Connery), On Her Majesty's Secret Service (George Lazenby), Moonraker (Roger Moore), Licence to Kill (Timothy Dalton) and Die Another Day (Pierce Brosnan), with Skyfall (Daniel Craig) released as downloadable content for the Xbox 360, PS3 and PC and included on disc for the Wii U version. Additionally, some of the original talent from the films add their likenesses and voices to their associated characters.

Upon its release, 007 Legends received generally negative reviews from critics, who criticized the choice of missions, bland gameplay and lack of an overarching story; though its multiplayer mode did attract some praise. It is the fourth and final James Bond game title released by Activision and the last game Eurocom developed before the company ceased operations. It remained the final James Bond video game for 8 years until November 2020, when it was announced a new Bond game, developed by IO Interactive, had entered development.

Being built on the engine used for Eurocom's previous title, 2011's GoldenEye 007: Reloaded, 007 Legends shares much of the same gameplay, though there are some notable additions and modifications. The most significant change is the greater focus on stealth-based play, with enemy AI being more suspicious and investigative. Throughout the campaign players will frequently be presented with situations that require stealth to get past, though often running-and-gunning will also be an option. To complement such stealth scenarios, players will have access to three gadgets from the start of the campaign: the returning smartphone, which has new vision modes and binocular capabilities; a new dart pen that can fire three different types of darts, including distraction, shock and tranquilizer darts; and a wristwatch that can track enemies and fire a laser and map nearby enemies and cameras.

Another notable addition is the incorporation of an XP (experience points) progression system. Players can use XP to unlock and/or upgrade gadgets, weapons (and attachments) and Bond's physical abilities. Other notable points include there being at least one vehicle-based level in each of the missions, a new free-form melee function that enables players to control punches with the analogue sticks and new weapons. As with the MI6 Ops Missions mode from GoldenEye 007: Reloaded, Challenges will present extra missions based on assault, elimination, stealth and defence-based objectives, with adjustable difficulty. New to this mode will be the option to play special missions for some of the villains and companions from the single player. Players' scores will be uploaded onto online leaderboards.

Multiplayer is supported across all platforms. 4-player split-screen is available for local offline play while online play will have capacity for up to 12 players in a match. Players' multiplayer experience are indicated by their level, such as Level 50 (00 Agent Grade 0). There is also a 00 Specialization mode, similar to Call of Duty's Prestige system. Character skins and maps from the single player are available to players. Players can also equip gadgets to enhance their abilities, such as the Fast Switch gadget which halves the time it takes to switch weapons. Scenarios revealed are Conflict, Golden Gun, You Only Live Twice, Escalation, Data Miner, Team Conflict, Icarus and Black Box.

The game begins with the opening chase sequence in Skyfall, in which MI6 agent James Bond (likeness of Daniel Craig, voice of Timothy Watson) pursues the mercenary Patrice in Istanbul, only to be accidentally shot and wounded aboard a train by his partner Eve Moneypenny (Naomie Harris). Plunging into the river below, Bond begins to flash back to several of his previous missions that took place in-between Quantum of Solace and Skyfall.

In Miami, Bond awakens in a hotel room to find Jill Masterson dead from skin suffocation, coated in gold paint. Days later in Switzerland, Bond infiltrates the facility of Auric Goldfinger (Timothy Watson, likeness of Gert Frobe), the man responsible for Masterson's death. He discovers Goldfinger's plan to irradiate the United States Gold Depository at Fort Knox, Kentucky in Operation Grand Slam. Bond manages to convince Goldfinger's personal pilot, Pussy Galore (likeness of Honor Blackman, voice of Natasha Little), to inform the CIA, and he and the United States Army manage to thwart Goldfinger's scheme in the nick of time.

In the Swiss Alps, Bond and his lover Contessa Teresa "Tracy" di Vicenzo (likeness of Diana Rigg, voice of Nicola Walker), daughter of Italian Unione Corse boss Marc-Ange Draco, escape via skis after an attack by soldiers of Ernst Stavro Blofeld (Glenn Wrage), a terrorist mastermind residing in his mountaintop lair, Piz Gloria. Bond is injured by a helicopter gunship during the gunfire, and Tracy is in turn captured by Blofeld's men. Sometime later, Bond and Draco lead an aerial attack on Piz Gloria in order to rescue Tracy. They succeed. However, on their honeymoon, Bond and Tracy are attacked by Blofield and the latter is killed.

Bond finds his CIA agent friend Felix Leiter (Demetri Goritsas) maimed in his house alongside his dead wife. The man responsible is Franz Sanchez (likeness of Robert Davi, voice of Rob David), a Mexican drug lord whom Bond and Leiter had unsuccessfully attempted to take down weeks earlier. On a quest for vengeance, Bond and DEA agent Pam Bouvier (Carey Lowell) infiltrate Sanchez's facility inside an old Otomi temple, intent on killing him. A car chase ensues, and Bond kills Sanchez with the lighter given to him by Felix when Bond found him on the floor.

In Iceland, Bond and NSA agent Giacinta "Jinx" Johnson (Madalena Alberto) arrive at a party held by billionaire philanthropist Gustav Graves (Toby Stephens), who is believed to be involved in the theft of military satellite components. Jinx spots Zao (Jason Wong), a rogue Korean People's Army operative who killed two of Jinx's colleagues, and believes he may be involved. They learn that Graves plans to weaponize ICARUS, a satellite used to reflect sunlight, in order to destroy South Korean forces on the DMZ, opening the way for a North Korean invasion of the South. Bond and Jinx manage to board Graves' plane after a lengthy car chase with their Aston Martin DBS V12, killing Zao in the process. The ensuing firefight causes the plane to head downwards in a tailspin, but Bond manages to kill Graves and escape with Jinx.

In Brazil, Bond and Holly Goodhead (Jane Perry), a NASA scientist moonlighting as a CIA agent, infiltrate the rocket launch facility of Hugo Drax (Michael Lonsdale), a billionaire industrialist who has started his own private space exploration program. They quickly learn that Drax, a twisted social darwinist, intends to wipe out the human race while creating his own new 'master race' from personally selected specimens, spared from the destruction of Earth via biological weapons on-board Drax's personal space station. Bond and Goodhead manage to get on board the station via a shuttlecraft and proceed to destroy it, killing Drax in the process by blowing him out of an airlock.

Back in the present, Bond regains consciousness on the river bank, injured, but alive. A few days later, he is seen in Shanghai following Patrice to prevent the assassination of an unknown figure, which 007 succeeds in and kicks Patrice off a building to his death before Bond can learn of his employer's identity. After finishing his report to M (Judi Dench) through a phone call, he is informed by Bill Tanner (Rory Kinnear) that another mission awaits him.