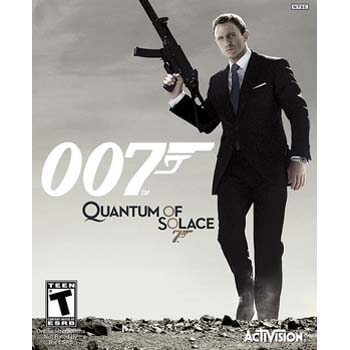 007: Quantum of Solace is a first-person shooter (third-person shooter for Nintendo DS and PlayStation 2) video game based on the films Casino Royale and Quantum of Solace. The game was released for Microsoft Windows, Nintendo DS, PlayStation 2, PlayStation 3, Wii and Xbox 360. The game was released on October 31, 2008 in Europe, November 4, 2008 in North America, and November 19, 2008 in Australia. The game's release coincided with the release of Quantum of Solace. The game is the first James Bond title published by Activision; the company acquired the video game licence to the James Bond franchise in 2006. The game was released on Microsoft Windows, PlayStation 3, Wii and Xbox 360 developed by Treyarch, Beenox ported the Microsoft Windows and Wii versions alongside Treyarch, Vicarious Visions and Eurocom developed their own versions for Nintendo DS and PlayStation 2. It is powered by the IW 3.0 engine. It is first to feature Daniel Craig's voice and likeness, as well as those of Eva Green, Judi Dench, Mads Mikkelsen, Olga Kurylenko and Mathieu Amalric. It is also the only Activision-published James Bond title to be developed primarily by an American studio, as the later Bond games published by Activision would be developed by British studios Eurocom (in Derby) and Bizarre Creations (in Liverpool).

The game begins with James Bond kidnapping Mr. White, a member of the previously unknown criminal-terrorist organization Quantum. While he and M interrogate White, they are attacked by the traitorous MI6 agent Henry Mitchell, who is killed by Bond while White escapes. Later, Bond spies on a meeting of Quantum members and photographs them; among them is Dominic Greene, a well-known environmentalist.

The game jumps forward to Bond crashlanding in Bolivia, where Greene is trying to buy land. By this time, Bond has met Camille Montes who is seeking vengeance against General Medrano, who is trying to overthrow the Bolivian government. Bond learns that Medrano killed Camille's family, and this is why she wants revenge. Bond opens up to Camille about the death of his former love, recounting the events of Casino Royale. The player follows through the plot of Casino Royale, from Bond chasing Mollaka through Madagascar, Bond infiltrating the Science Center to kill Dimitrios, saving Skyfleet from Carlos, killing Bliss en route to Montenegro, meeting Vesper, saving Le Chiffre from Steven Obanno and his men, saving Vesper from Le Chiffre, and finally confronting Vesper and Gettler in Venice where Vesper dies, at which point it flashes back to the present.

Bond and Camille soon arrive at a hotel in the middle of the Bolivian desert. There, Greene and Medrano are discussing the land that Greene wants to buy; Greene will fund Medrano's attempt to overthrow the government in exchange for the land that he wants. Bond and Camille break up the meeting; Camille then kills Medrano while Bond kills Greene. During the fight, the hotel's fuel cells are ignited; Bond and Camille manage to escape from the hotel before it explodes. They leave the area in an MI6 helicopter. In the closing scene, it is revealed that Mr. White and Guy Haines are looking at MI6 debriefings and updates on 007's missions. The game ends with a short scene of Bond outside the house telling M that he's going in.

The Wii version of the game features up to 4 players in a split screen offline multiplayer. Online mode allows for a maximum of 4 players in a choice of 4 modes: Conflict, Rush, Team Conflict and Team Rush. These have different ratings for each individual mode. The Wii version also uses Friend Codes which allow players to create games just for themselves and friends. The online mode uses Miis.

The DS version of the game is designed differently from its console counterparts. The game is played with the DS held sideways and is in the third person. Bond's movements are controlled by dragging the stylus around the touchscreen. Actions (such as firing a weapon) are performed by pressing icons on the touchscreen, while the DS's buttons are relegated to primarily initiating hand-to-hand combat. There are 6 weapons in this version. The storyline followed by the DS version is also different. The character of Camille is cut altogether, the opening mission at White's Estate is replaced by a training simulation at MI6 Headquarters and, after fighting street gangs in Bolivia, the final mission and boss fights against Greene and Mr. White take place at Guy Haines' Mansion (a deleted scene from the original ending of the film).

The PlayStation 2 version of the game is an over-the-shoulder third-person shooter, much like 007: Everything or Nothing. This version excludes missions such as "Miami Airport" and "Train", but it adds missions such as the docks level.

Team Conflict: Basic Team Deathmatch of MI6 versus the 'Organization'.

Golden Gun: This is a standard free-for-all conflict, which the main aim is to score 100 points. One point is scored for a kill with normal weapons, or for picking up the Golden Gun, while kills while holding the Golden Gun (or killing the person with it) scores 6. The winner is the first to score 100 points or the highest number of points in the allotted time limit.

Bond Evasion: There are two teams, MI6 and The Organization. One player from the MI6 team is randomly designated as Bond, and therefore as the VIP. MI6 wins the round if Bond can get to the escape point, or if all of the Organization are eliminated. The Organization wins if Bond is prevented from escaping within the time limit, or if he dies.

Territory Control: Basic match of one team having to control a point to gain points for their team.

Classic: Players starts with a GF 18 A (Glock 18). Weapons and explosives are spawned around the level for them to pick up.

When playing in Multiplayer, credits are earned based on the number of points acquired. These are used, in a currency format, to purchase further enhancements and upgrades. These can be spent on unlocking new weapons, explosives, gadgets (such as increased health or better accuracy) and attachments for weapons. The upgrades can be accumulated in any order, instead of in a set order, and are able to stack.

Conflict: This is a death-match. Up to four players compete versus each other to score as many kills as possible in a selectable number of minutes.

Rush: This is a mission death-match. All players (up to four) are against each other and are assigned certain missions to complete in a selectable number of minutes.

Team Rush: This is a team play game. The goal is to do specific missions before the other team does, all while staying alive. 15 minutes is the time limit.

The Wii's ranking system is the same as Mario Kart Wii's online. Players start at 5000 points and can gain or lose points depending on how well they played. The 5000 points are separate for each game mode, for example, A player can have 5350 points in Conflict, and have 5000 points in Rush or Team Rush.