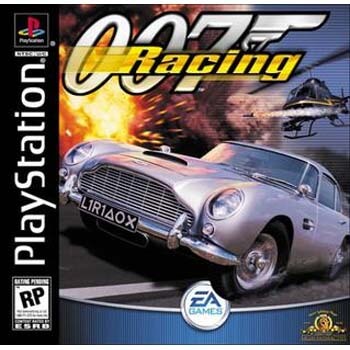 007 Racing is a racing video game based on the James Bond license. It was developed by Eutechnyx, published by Electronic Arts, and released in 2000 for the PlayStation console system. This game marks the seventh appearance of Pierce Brosnan's James Bond; the game included his likeness but not his voice, which is provided by Tim Bentinck. Including many revived characters from previous entries, the game is considered to be a spin-off out of the original chronicles.

In 007 Racing the player takes on the role of British secret agent Commander James Bond behind the wheel of some of his most famous vehicles from the then-current 19 official films. Cars include the Aston Martin DB5 made famous in its initial appearance in Goldfinger, the Lotus Esprit from The Spy Who Loved Me and For Your Eyes Only, and the BMW Z8 that briefly appeared in The World is not Enough as well as seven other automobiles. Each car is equipped with all the usual gadgetry and weapons issued by Q, the Quartermaster of a special branch of MI6 referred to as Q-Branch.

In 007 Racing, a high ranking European diplomat and businessman plans to hijack a shipment of NATO weapons and smuggle them to international terrorists inside cars that roll off the assembly line of his automotive plants. As Bond, it is up to the player to stop him. The gamer is supplied with some of the most famous gadget-filled cars from the Bond universe to thwart the evil villain.

The story opens with Bond rescuing Cherise Litte from an Eastern European country (presumably Estonia) and getting her over the border in his Aston Martin DB5. Upon his return to London he is informed by M that a freighter carrying top secret NATO weapons including laser-guided surface-to-air missiles, long-range missiles, missile shields, latest GPS technology and Q equipped BMW 750iL bound for Halifax was intercepted in the Labrador Sea, south of Greenland. Bond is tasked with finding the cargo. His mission takes him to New York City, where he is met by his friend from the CIA Jack Wade. Upon arriving in New York he is informed by a villain that a bomb has been planted on his car and that any attempt to defuse it or slow down the vehicle will cause it to explode. Bond jettisons the car in the Hudson River.

Bond continues on with finding the electromagnetic pulse device that was stolen and destroying ten computers in distribution center from which a car transporter carrying the smuggling cars. He intercepts the transporter with his Aston Martin. Bond then goes to Mexico with his BMW Z3, to where he was pointed by questioning the transporter driver, the henchman Whisper. He is trying to track Zukovsky and once he manages, he finds out that behind everything is Dr Hammond Litte, Cherise's father, and that her rescue was just a decoy mission aiming to distract him from the freighter. Bond then engages in race with Xenia Onatopp and her Ferrari F355 after which he gets captured and taken to Louisiana. He manages to escape and finds the stolen BMW, after which he pursues and destroys the boat driven by Jaws.

Back in New York, Bond downloads the files from four limousines with his BMW Z8 and discovers that Litte's real plan is to release a deadly virus that will kill millions. Bond then goes to the Baltic Sea with his Lotus Esprit and after infiltrating opponent's underwater base he destroys the plane transporting the virus.