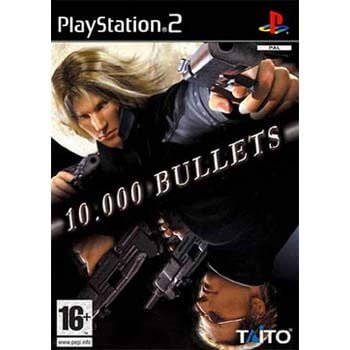 10,000 Bullets, known in Japan as Tsukiyo ni Saraba (ツキヨニサラバ, lit. "Moonlit Shadow"), is an action/third-person shooter video game developed by Blue Moon Studio and published by Taito Corporation for the Sony PlayStation 2 (PS2) video game console. It was released in Japan in 2005, and distributed in Europe by 505 GameStreet later that year. 10,000 Bullets follows an elite hitman named Crow, who works for an Italian mob family and has the innate power of the "gunslinger", allowing him to manipulate the flow of time in battle. The gameplay of 10,000 Bullets focuses on this ability, in which the player must slow down the action in order to avoid the waves of enemy assaults and other hazards.

10,000 Bullets was directed by Suikoden franchise creator Yoshitaka Murayama, who left Konami in 2002 and started his own development firm, Blue Moon Studio, shortly thereafter. Accompanied by Spriggan illustrator Ryōji Minagawa and composers Yasunori Mitsuda and Miki Higashino, Murayama began producing 10,000 Bullets about a half a year after founding the new company. Murayama had wanted to create an action-shooter even before the Suikoden series. 10,000 Bullets was met with poor sales in Japan and a mediocre response from import reviewers. Critics found the game to be unoriginal and noted camera problems, but enjoyed the action sequences.

10,000 Bullets follows Crow, a hitman living in Ireland who works for the Rome-based crime syndicate known as the Tonio Family. Crow possesses the special "gunslinger" ability, which allows him to slow down time. He inherited this trait from his late mother, a powerful fortune teller who was murdered when Crow was very young. After being taken in by mob boss Papa Tonio, Crow is taught to optimize his abilities by a fellow hitman named Judas, a fugitive from France. Crow hopes to one day exact revenge on the person responsible for his mother's death. The protagonist is partnered with the young Alice, an Englishwoman of German descent fleeing custody after the death of her military officer grandfather.

10,000 Bullets is an action/third-person shooter in which the gun-wielding player character battles numerous enemies and bosses in different environments. Styled similar to cinematography found in The Wachowskis' The Matrix film franchise and gameplay mechanics in games such as Dead to Rights and Max Payne, the player is given an ability to slow down time and thus dodge multitudes of flying bullets and other obstacles. The first level, "enhancement", slows down all action, including the player character. The second level, "Blitz", slows down only the enemies, allowing the player to move around at normal speed. The third level, "frozen time", halts everything around the player, who again maintains normal speed. By pressing the shoulder buttons, the player can lock-onto and switch aim at the various enemies. Successfully dispatching several foes in a row earns the player bonus points, which can be used at the end of a stage to purchase upgrades like more health, as well as special attacks and acrobatic evasion skills that can be mapped to certain controller buttons. The game features four playable characters (Crow, Alice, Dragon, and Boris), each of which has their own unique set of abilities. Between the action sequences, the player must advance the plot through a graphic adventure-style interface, where certain characters must be spoken to in order to continue.