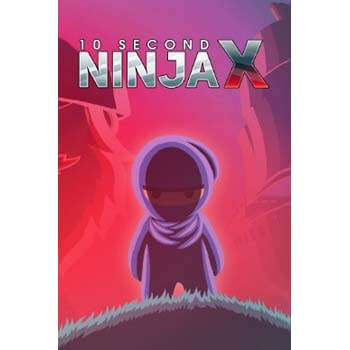 10 Second Ninja X is a 2016 platform game developed by GameDesignDan and Four Circle Interactive, and published by Curve Digital. The game was free for PlayStation Plus subscribers in March 2016. The game was released on July 19, 2016 for PlayStation 4, PlayStation Vita, Microsoft Windows and Xbox One, and is planned to release on Nintendo Switch in 2021.

10 Second Ninja X is a sidescrolling puzzle platformer. The game follows a ninja who must destroy robots at high pace within a set time frame of 10 seconds. Every level is set with a timer, with the player having to finish the level within 10 seconds. The player has several attacks, including a projectile, that has limited capacity. Each level finishes when the player has destroyed all targets onscreen. The game features different star ratings for completed levels, with higher stars given for completing the missions in faster times.