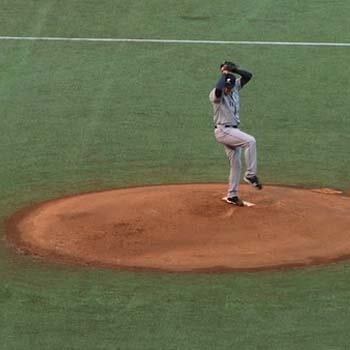 The 12–6 curveball is one of the types of pitches thrown in baseball. It is categorized as a breaking ball because of its downward break. The 12–6 curveball, unlike the normal curveball (also referred to as the "11 to 5 curve" or a "2 to 8 curve" for its motion), breaks in a downward motion in a straight line. This explains the name "12–6", because the break of the pitch refers to the ball breaking from the number 12 to the number 6 on a clock.[1][2] While the 11-5 and 2-8 variations are very effective pitches, they are less effective than a true 12–6, because the ball will break into the heart of the bat more readily.

The pitch is used throughout Major League Baseball. It has several nicknames, including the "yellow hammer".

The 12 to 6 curveball is the toughest type of curveball to hit, because it moves vertically, and has no horizontal break. The difference of the speed from a fastball and the break make the pitch difficult to hit if a pitcher uses it correctly in a pitching sequence. The 12 to 6 curveball is usually pitched from the overhand motion, as a three-quarters or sidearm delivery would cause the ball to break 2 to 8 instead of 12 to 6. The sharp vertical break on the 12–6 curveball is created when pitchers apply topspin to the ball with their fingers in the process of releasing it.

The 12–6 curveball is thrown similarly to most curveballs. The pitch is generally thrown using a four-seam grip, in which the middle finger on the pitcher's throwing hand is placed in the gap between the two seams on the right side, and the index finger is placed directly next to it. The pitcher's thumb is placed directly on the bottom of the baseball. This grip allows the pitcher to create a high amount of topspin while still having a good control of the pitch. The pitch is then thrown with an exaggerated 12–6 motion with both the middle finger and the thumb simultaneously helping move the baseball towards home plate, while the pitcher's index finger giving the ball topspin. This extensive combination of mechanics makes this one of the most difficult pitches to master.