12Riven: The Psi-Climinal of Integral 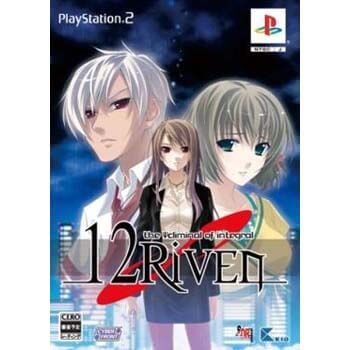 12Riven: The Psi-Climinal of Integral is a visual novel video game developed by KID, CyberFront, and SDR Project, and released on March 13, 2008, for the PlayStation 2 and April 16, 2009, for the PlayStation Portable. There is a regular edition, and a special edition which included the game's original soundtrack. KID are known for producing the Memories Off series, and the Infinity series which includes Never 7: The End of Infinity, Ever 17: The Out of Infinity, and Remember 11: The Age of Infinity. When KID declared bankruptcy in November 2006, production on the game was halted until CyberFront took over and resumed production.

The game had two different PC releases on April 4, 2008. It was released as a standalone product and as a part of the Infinity Plus pack (which includes PC versions of Never 7: The End of Infinity, Ever 17: The Out of Infinity, Remember 11: The Age of Infinity and 12Riven). A port for Android and iOS was announced by Cyberfront in 2012 but was ulimately not released as Cyberfront was dissolved in 2013.

12Riven is a visual novel in which the player makes progress by reading the game's story. At certain points during conversations with other characters, the player is given a set of choices. Depending on what the player chooses, the story diverges into different branches, eventually leading to different endings; there is only one "true ending".

The story of 12Riven takes place on May 20, 2012, with Renmaru Miyabidō biking his way speedily towards the abandoned Integral (インテグラル, Integuraru) building after receiving a message on his cellphone that Myū, an old friend of his, would die at the building's top level today at noon. When he gets there, he checks his wristwatch and sees that it is 11:24 AM.

Elsewhere, Narumi Mishima is on her motorcycle heading towards the same location. She has received a request from a friend and coworker asking her to help save a girl named "Myū" at Integral. Narumi must save Myū to prevent the execution of the "Second Eclipse Plan" (第弐エクリプス計画, Daini Ekuripusu Keikaku). Narumi has never heard of this phrase before, moreover, the message was sent with the "XXX Lv6" marking. This was a rating scale for the severity of a situation and a level 6 marking has never been used. Even a large scale terrorist threat was set at level 5. The message also indicated to Narumi that someone named Renmaru may be there, that he will be on her side.

Renmaru finds nothing at the observation deck of the building, but when he goes outside onto the opening of the building, he finds Myū injured on the ground. Renmaru also finds her attacker there but is unable to defeat him because every time Renmaru tries to connect a blow, he is thrown onto the ground himself by some unknown force. At this point, Myū's attacker draws out a gun, he takes Myū and threatens Renmaru to leave the place quietly after he counts to ten with his eyes closed. Renmaru does not know what to do and stands there hopelessly. Right as the attacker counts down to one, Narumi arrives at the scene and points her gun at him.