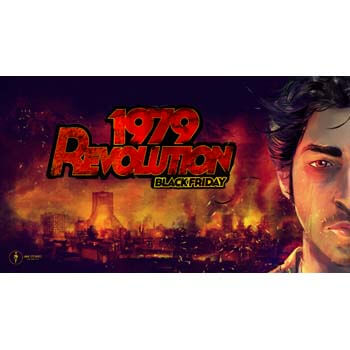 1979 Revolution: Black Friday is an adventure interactive drama video game developed and published by iNK Studios, with assistance from by N-Fusion Interactive. It was released in April 2016 for Microsoft Windows and macOS, in June 2016 for iOS devices, and in December 2016 for Android devices; the game was released in July 2018 for PlayStation 4, and August 2018 for Nintendo Switch and Xbox One. Players control Reza Shirazi, an aspiring photojournalist, who returns to Iran amidst the Iranian Revolution. As he becomes more involved in the events of the Revolution, Reza is forced to make decisions in order to survive. Players make timed responses throughout the game, determining the outcome of the plot. They are tasked with taking in-game photographs of their surroundings, and given historical background of the events.

The game was in development for four years, and was created to combine elements from video games and documentaries with an engaging narrative. Game director Navid Khonsari, who was a child in Iran at the time of the Revolution, developed the game with the intention of making players understand the moral ambiguity of the situation. The development team conducted extensive research for the game, interviewing historical scholars and Iranians who lived in Tehran during the Revolution, as well as gathering numerous archival photos and historical speeches. The game's performances were recorded using motion capture, and each of the characters was developed with ambiguous attitudes and morals.

At release, 1979 Revolution was well received by critics, with praise particularly directed at the narrative, characters and performances, and historical representations, though some criticism was directed at the quick-time sequences and visual quality. The game was also criticized by an Iranian journalist who declared it as propaganda. Khonsari felt afraid to reenter Iran as a result, and other members of the development team adopted aliases for protection. The game was nominated for multiple year-end accolades from several gaming publications.

1979 Revolution: Black Friday is an adventure interactive drama video game. Players control Reza Shirazi—an aspiring photojournalist who returns to Iran amidst the Iranian Revolution. Throughout the game, players are presented with the ability to interact with their surroundings, including crowds of people on strike, and a homeless mother and her infant child. Upon interaction, players are frequently prompted to take photographs of the selected person or event using Reza's camera. Menus appear on screen, comparing the in-game photograph to real images of the event taken by photographer Michel Setboun. Players also collect tapes throughout the game, featuring the speeches of revolutionary leader Ayatollah Khomeini.

Some parts of the game require timed responses from players, often leading to significant decisions that impact the game's story. Some conversation trees require players to select a response within a limited time, otherwise Reza remains silent. The game also requires action choices, wherein players must decide what to do in specific circumstances; for example, one sequences tasks players with choosing whether to take aggression during a protest, or to take photographs. Other characters will respond to the decisions accordingly, and a notification feature indicates that a character will remember the selected response. In action-based sequences, players follow on-screen prompts for quick time events in order to stay alive. Should players fail to follow the prompts in the allocated time, the game restarts from prior to the quick time event.

The game opens in 1980, as aspiring photojournalist Reza Shirazi (Bobby Naderi) is ambushed at his hideout by police, and taken to Evin Prison, where he is interrogated by Asadollah Lajevardi (Navid Negahban). Reza, who was part of the Iranian Revolution in an attempt to overthrow the Shah, chooses whether or not to cooperate with Asadollah, who goes by the name of Hajj Agha.

The game cuts to September 1978, as 18-year-old Reza and his pacifist friend Babak Azadi (Omid Abtahi) watch crowds chanting about the revolution from a rooftop, and Reza takes photographs. The two then walk the streets, and arrive at a protest where revolution leaders are giving speeches. Reza's cousin Ali Shirazi (Nicholas Guilak) arrives and, when the protest is interrupted by soldiers and the crowd begins to disperse, he tries to convince Reza to throw rocks at the soldiers. Babak opposes, and Reza is left to decide whether to act aggressively and throw rocks, or act passively and voice his concerns instead. When the soldiers start threatening the crowds by firing, Reza and Babak flee into an alley, shortly followed by Ali and an injured Abbas (Ray Haratian), one of the revolution leaders who was stabbed in the commotion. After briefly being tended to, Abbas is escorted away by Ali and Bibi Golestan (Mozhan Marnò).

In a flashforward at the prison, Hajj brings out Reza's brother Hossein Shirazi (Farshad Farahat), and threatens to harm him if Reza does not cooperate and provide information about Bibi. The game returns to Reza and Babak, who arrive at the rebellion hideout. Reza meets with Abbas, who is convinced that one of the revolution leaders betrayed and stabbed him, and tasks Reza with discovering the culprit. As he is investigating, Reza is approached by some of the leaders and accused of stabbing Abbas. A brief argument ensues, but is shortly ended as police begin to ambush the hideout. Abbas hurriedly demands an answer from Reza regarding the betrayer, and Reza is forced to decide which of the revolution leaders stabbed Abbas. In a flashforward, Hajj reveals to Reza that he chose the wrong person, but they were killed shortly thereafter.

At the hideout, Reza is arrested by the police, but Hossein arrives and demands to know where Ali is located. Reza refuses to tell him, and Hossein drives him to their parents' household. The following day at a protest, Reza and Babak discover that martial law has been declared. They move to the streets and join the large crowds. Soldiers arrive and demand the crowds to disperse; when the crowds hold their ground, the soldiers begin firing at them. Reza rushes to Ali, who has been shot, and bandages his wound. Babak and Bibi help move Ali away from the commotion and into an alley, where they find Hossein. Hossein aims his gun at Ali, threatening to shoot him for his crimes, and Ali produces his gun and threatens Hossein. Reza tries to convince the two to stop, but is interrupted by firing soldiers. Reza then chooses whom to save from the gunfire: Hossein or Ali. Should Reza save Hossein, the latter is thankful and directs him to the nearest hospital; Ali dies regardless of Reza's choice. Bibi and Reza escort Babak, who was wounded in the gunfire, towards the nearest hospital, but he shortly dies of his wounds.