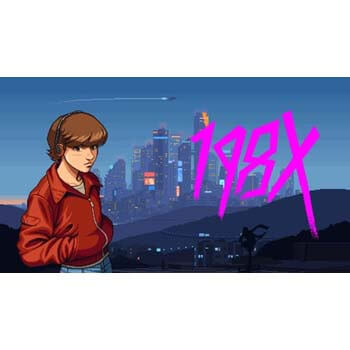 198X is an arcade video game developed by Swedish team Hi-Bit Studios and published by Sonka. Released worldwide on January 23, 2020 for the Nintendo Switch, the game received a Metacritic rating of 65. An homage to arcade gaming in the 1980s, 198X's coming-of-age story follows an unnamed "Kid" as he discovers a video arcade in an abandoned factory and falls in love with video gaming. The gameplay of 198X's 5 chapters are each based around different arcade game genres that were popular at the time, such as beat 'em ups and horizontally-scrolling space shooters.

In an introductory sequence entitled Beating Heart that plays like a side-scrolling beat 'em up, the teenage protagonist fights his way from the subway station and through the streets of the unnamed city in which he lives until he reaches a hospital where he is attacked by a hooded figure with glowing red eyes.

Set in the 1980s, the game follows the "Kid", the teenager from the introduction, who feels stuck in his childhood home in "sleepy suburbia" as he waits for his life to "move forward". One night, as "the Kid" wanders the streets of his unnamed city looking for anything to "make his heart skip a beat again", he stumbles onto an abandoned factory that was built "long before" the protagonist was born and now houses an arcade. Wondering if he found a place where he can fit in, he starts playing a horizontally scrolling space shooter entitled Out of the Void. Feeling disconnected at school, the Kid's mind frequently returns to the arcade where he was "on an asteroid somewhere fighting space invaders." The only person he notices in school is "her" a "punk rocker from the south district" who's freedom the Kid admires. 198X then cuts to the KId playing an arcade racing game entitled The Runaway. During The Runaway's second stage, the Kid explains that he's started to spend every night at the arcade, where every game he mastered made him "stronger" and "more confident". One evening, the Kid reminisces about his childhood and how "anything was possible" back then before "everyone got brainwashed" in high school. He then mentions how when you were a kid, "shadows seem darker and more terrifying" yet "more exciting" at the same time. The game then transitions to a ninja video game called Shadowplay. That night, while walking to the arcade, the Kid reveals that his parents split up due to an incident involving the Kid's father. He also mentions that night was when "everything changed" at the arcade before 198X transitions into a role-playing video game entitled Kill Screen where the player has to defeat 3 dragons in order to solve a maze before fighting the unwinnable SHODAN-like final boss. Afterwards the Kid is seen sitting outside the arcade in the rain mentioning that he "was still there" but that "nothing was the same". Characters from 198X's various games begin to materialize around him, with the protagonist concluding that the "game was not over".