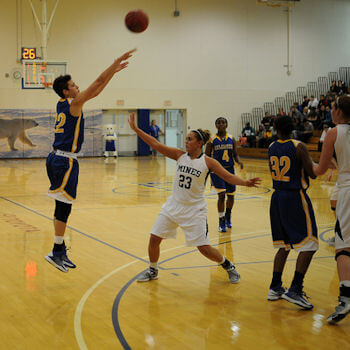 The 2–3 zone defense is a defensive strategy used in basketball as an alternative to man-to-man defense. It is referred to as the 2–3 because of its formation on the court, which consists of two players at the front of the defense (and closer to half court) and three players behind (and closer to the team's basket).

The widespread use of the 2–3 zone is likely due to its somewhat intuitive operation. The two players on the top of the zone are usually a team's guards, and they guard the zones closest to them on the perimeter and three-point arc. In the same way, a team's forwards guard the sides of the zone and its center guards the lane and center of the defense. As the opposing team moves with the basketball around the court, the zone as a whole shifts accordingly.

The individuals that make up a 2–3 zone are often described as "being on a string." This means that as one player moves, he pulls the imaginary string (which is attached to every defensive player) and therefore pulls the entire defense in that same direction. As the ball moves throughout the court, every player should shift simultaneously in the direction of the ball. When a player in the zone is shifting, that player should look to fill in gaps of space vacated by other shifting players and also guard offensive players in that space.

For example, if a player with the ball stood on the right wing (beyond the three-point arc), defensive players 1 and 2 would shift towards that direction. To effectively operate the 2–3 zone, a defense must move as a whole. In this case, that would mean every defensive player shifting around 5 to 6 feet in the direction of the right wing and the player with the ball. Similarly, if that player moved to the right corner, the 4 player would move to guard him and the rest of the defense would shift towards that direction. So much so, in fact, that ideally no defensive players should be on the left side of the court at all, because it would require several passes, or a long pass(skip pass) through the defense to get the ball to the left side.

Communicate: This is probably the most important thing to remember when playing a 2–3 zone. Players should talk to each other on the court about who's open, who should be where, what to do, and everything else worth knowing. The team must work together, and the best way to do so is to communicate with each other on the floor.

Players should anticipate the next pass before it happens, so that when it does, each person knows where to go on the floor and fewer breakdowns happen.

Although it is a zone defense, players should always be aware of the offensive players' locations on the floor. It is more important to guard an open player than stay within the normal constraints of the zone.

The 2–3 zone is a very effective defense when executed properly. This defense's strong suits include:

On the other hand, there are many reasons why many coaches prefer not to use the zone. Its strengths can easily become its weaknesses, which include: